will.i.am to spin at Club Answer 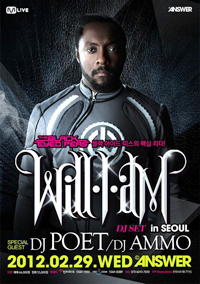 "will.i.am, who is scheduled to visit Korea soon, requested a meeting with Korean fans, up close and personal", said a spokesman for CJ E&M. "We organized a club party to respond to his wishes, letting fans enjoy his proximity in a relatively intimate space, where will.i.am will DJ himself".

All three musicians are known to be producing new material for YG Entertainment's girl group 2NE1, which the management agency has been promoting for some time.

This is not the first time will.i.am has made waves in this part of the world. He made a high-profile appearance with 2NE1 member C.L. at cable channel Mnet's Asian Music Awards (MAMA) last November, performing the American group's smash hit "Where Is The Love", with the former rapping and the latter singing the refrain.

The event took place at the Singapore Indoor Stadium, reflecting the K-pop industry's ongoing efforts to extend its overseas reach.

From the 1990s, will.i.am has been a prolific producer, writing music for the late Michael Jackson, pop stars Britney Spears, Rihanna and Justin Timberlake, rock legends U2 and hip-hop artist Usher among many others.

The artist has ventured into many different projects recently, most notably by taking the post of Intel's director of creative innovation last year. He is also scheduled to appear as a judge and coach on the British version of the popular TV audition franchise, "The Voice".

will.i.am's visit to Seoul will also be a part of a 12-city Intel Ultrabook Project tour, during which he uses the thin portable computer and inspiration from each locale to produce new material. Ten thousand downloads of each piece of music will be available exclusively at intel.com.

Meanwhile, both accompanying DJs are already established producers in the United States, with many well-known pop song credits, notably with the Black Eyed Peas. "This Time (Dirty Bit)", the smash hit single from the group's sixth studio album was co-produced by DJ Ammo.

DJ Poet came to Korea once before to produce some new material for 2NE1 last year.

"will.i.am to spin at Club Answer"
by HanCinema is licensed under a Creative Commons Attribution-Share Alike 3.0 Unported License.
Based on a work from this source