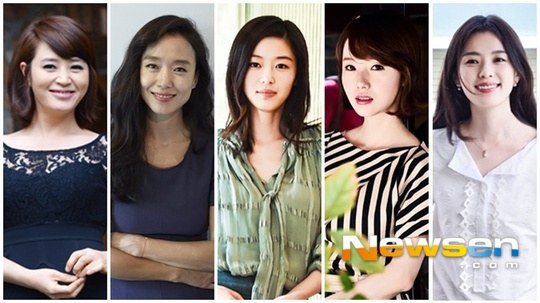 Will it be Jun Ji-hyun or not? The public is also looking down several ways with the Best Actress at the Blue Dragon coming up.

The Best Actress, also known as the 'flower of the awards' has everyone's attention as the 36th Blue Dragon Awards is going to be the final film award of the year.

Candidates are Kim Hye-soo from "Coin Locker Girl", Lee Jung-hyun from "Alice In Earnestland", Jeon Do-yeon from "The Shameless", Jun Ji-hyun from "The Assassination" and Han Hyo-joo from "Beauty Inside". Jun Ji-hyun played a sniper named Ahn Ok-yoon and successfully contributed to creating a 18 billion dollar blockbuster. In Chungmuro where it's not common to see an actress in the center of a movie, Jun Ji-hyun's strike was refreshing.

Jun Ji-hyun was also the most talked about at the 52nd Daejong Film Awards, which had a lot of issues. The Daejong mentioned those who weren't present at the event and said, "We understand special reasons why some are not here today and one of them would be 'pregnancy'". Jun Ji-hyun's nomination was a sure thing.

Therefore, speculation about the Blue Dragon standing in favor of Jun Ji-hyun is increasing. Everyone says Jun Ji-hyun will get it but they can't be sure because her competitors aren't that easy to fool. Her competitors are Kim Hye-soo, Jeon Do-hyeon, Lee Jung-hyun and Han Hyo-joo.

In a world where men's movies are a thing, Kim Hye-soo and Jeon Do-yeon's work mean something. They chose to star in two low-cost movies "Coin Locker Girl" and "The Shameless" and focused more on quality than success. They didn't mind getting made-up ugly for it. There's a reason why their names are on the list of candidates.

Kim Hye-soo starred in "Coin Locker Girl" with freckles on her face, messy hair and a fat belly. She didn't care about her 'actress image' as she completely broke down for this one. Still, her aura and her eyes made everyone quiver even just by looking at her without her even having to open her mouth. Jeon Do-yeon did what she does best. Her movie was of great issue online even after it was taken down from theaters.

There are those who care much for Lee Jung-hyun too. She managed to leave such a good impression in the movie "Alice In Earnestland" that she has been getting endless love-calls from overseas. The movie made it through 40 thousand views and 10 million as a commercial movie.

Han Hyo-joo who is not as great as the rest but had to work with 100 different Woo-jin's also did a great job. She had to face 100 different people as Woo-jin and work on her emotions every time. She managed the situation very well and it looks like she's matured up a little.

The Blue Dragon is known for its unexpected changes. There have been times when people wished a certain actor or actress should get the award but was sure someone else would get it but their wishes came true. The Blue Dragon always gives its prizes out to those who deserve it.

"Will Jun Ji-hyun win Best Actress?"
by HanCinema is licensed under a Creative Commons Attribution-Share Alike 3.0 Unported License.
Based on a work from this source