Will Kim Tae-hee dodge the 'acting' controversy this time around with "Yong Pal?" 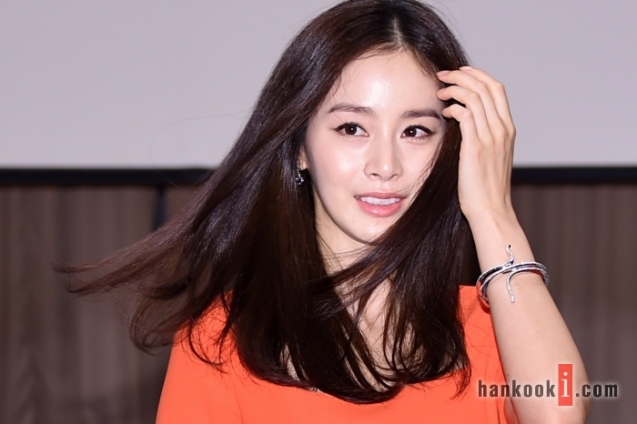 Actress Kim Tae-hee is very matter of fact. Even confronted by questions of the controversy regarding her acting and wedding rumors with boyfriend Rain, she calmly answers. She says she is trying to remember the actress inside of her who just first time set foot on a set. She wants to repay her fans' love by giving a great performance.

Kim Tae-hee was on fire at the at the press event held for SBS' new Wednesday-Thursday drama "Yong Pal" (written by Jang Hyeok-rin; directed by Oh Jin-seok) at the Mok-dong SBS hall on July 30th. The press' eyes were firmly on her as this is her comeback to dramas after the 2013 drama "Jang Ok-jeong" which will make this a two year absence.

In the show, Kim Tae-hee will be playing heiress Han Yeo-jin. She is being kept in a comatose state by her half-brother Han Do-joon (Jo Hyun-jae) and doctors. After she meets "Yong Pal" Kim Tae-hyeon (Joo Won), she will become a woman who dreams of revenge against those who imprisoned her.

During the event, Kim Tae-hee said "Han Yeo-jin is the heiress to and the first in line to succeed a conglomerate called Hanshin Group. However, her half-brother artificially made her into a vegetable in order to take her rightful place. The circumstantial is drastic and dramatic. I chose the project because I could try something new in terms of acting as the character needs to express a sense of betrayal and desperation".

While she liked the script, the fact that she had to basically lay still playing a comatose person for the first 4 episodes made her hesitant to take the role. However, she seems to be anticipating the revenge and the romance with the character played by Joo Won. What seemed to be the deciding factor was that the character is not a cliché heiress. She is not a character who tries to look pretty for men. She is a drastic and unfortunate character who was betrayed and left to rot away as a vegetable. Kim Tae-hee seems also to know that this project may be an important turning point in her career. While she gave her best in each project, the talk that she couldn't act always followed her.

She said "this project is going to be an important one for me. I'm trying to remember the actress inside of me who just first time set foot on a set. I was too ambitious up to this point but that will stop now. I will try a new approach leaving comfortable patterns and habits behind. I want to repay my fans' love by giving them a great performance. Around the time I made my debut, I was much lacking as I had to carry a show without proper preparations. As a result, I developed many preconceptions. I think I need to break them. It will not be easy but I will do my best to surprise you. I do not know what the outcomes of this project will be but please not be shy in giving me constructive criticism. I'll use them to improve myself and my acting".

And she is serious. She has put a lot of effort into the character including losing 4kg in order to portray a character who spent the last 3 years in bed and who had lost most of her muscle mass. It is interesting to speculate whether she will be able to leave behind the nickname of "Actress with only a pretty face" with this project.

She also commented frankly about the rumors of her impending marriage to her boyfriend Rain. She firmly said "to be honest, it is not like subject never came up between us. We are in a relationship after all. However, nothing concrete really came out of those talks. " She continued by saying "I'm not sure when or even who I'll end up marrying. So, it is somewhat stressful when plans are just created for me out of the ether. I worry that the public is also confused. Please understand that I cannot always respond to those rumors".

"Yong Pal" is a spectacular melodrama telling the story of a rogue surgeon, who will treat anyone anywhere for a price, meeting a "Sleeping beauty", an unconscious heiress, at a hospital. The show will air its first episode on Wednesday August 5th at 10PM.

"Will Kim Tae-hee dodge the 'acting' controversy this time around with "Yong Pal?""
by HanCinema is licensed under a Creative Commons Attribution-Share Alike 3.0 Unported License.
Based on a work from this source