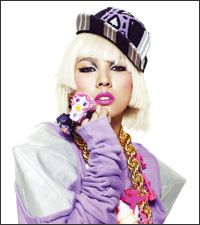 Sometimes nothing will go according to plan, even when you are a big star like Lee Hyori.

The singer has had her fair share of fame over the past 12 years, starting as the leader of the now disbanded girl group Fin.K.L, then as a solo singer and until recently the host of the popular television show "The Family is Out!" She is now back with a fresh album and, hopefully, a new look and tune, but returning to the pop scene after two years has proven to be tougher than expected.

First of all, there was the tragedy with the Navy frigate Cheonan. Lee's agency, Mnet Media, announced that they were postponing Lee's release of her fourth album, "H-Logic", from April 4 to 13. This was inevitable as most of the entertainment programs, including music shows, were being dropped by broadcasters due to the tragic incident. Along with the album, the online release of her tracks and music video were also pushed back.

Fans may have been disappointed, but the release of one of her tracks called "Swing" kept them busy. The hip-hop number showed that Lee has indeed transformed from the cute and likable character of the past to become darker and more solitary. "Swing" topped online music charts as soon as it was out, competing with Rain's new song, "Love Song".

Just when it seemed everything was back on track, news of the unintentional, and illegal, leakage on Sunday, of Lee's album, had her fans rushing to Web sites, including YouTube, and her agency frantically striving to find the culprit.

Lee's main tracks "Chitty Chitty Bangbang", "Bring it Back" and "How Did We Get" were leaked, which were originally scheduled to be released Tuesday night.

"Lee and the agency are suffering massive emotional and financial damage due to the illegal release of the songs. This would never have happened if the people who leaked them gave any consideration to the time and effort put into the album by Lee and her crew even for a second", Mnet Media said through a press release.

After the agency expressed their disappointment regarding the unfortunate leakage, the agency announced that they were pushing the schedule forward and releasing the album online on Monday. The album was released offline on Tuesday as scheduled.

Right after the official release of Lee's album, three of her tracks ― "Swing", "Chitty Chitty Bangbang" and "How Did We Get" ― were in the top 10 on numerous music Web sites as of Tuesday.

Promotional photos and the music video of Lee showed that she was not afraid of experimenting and using strong colors. Her last album, "It's Hyorish", showed her feminine yet edgier side, with hit songs such as "U-Go-Girl" and "Hey Mr. Big". This time Lee has added a bit more color and hip-hop elements.

"I have to say she does look a bit like Lady Gaga, but it's true she is the only Korean singer who can pull off all that makeup and wardrobe. It's definitely different from the idol groups and other solo singers who come out with softer and safer images", Kim Mun-jeong, a fan of Lee, told The Korea Times after watching the music video.

The music, which is one of the most important aspects of a singer, is currently under the microscope by fans and experts.

"(Chitty Chitty bangbang) is powerful, with the intro starting with drum beats, a staccato rap style and speedy bridge. It's a good combination of power and beats", a reporter from the sports daily Sports Seoul wrote, while other Web sites and reporters pointed out the lack of creativity.

Despite the criticism, it's evident that Lee has continued to contribute to the music scene, and we will have to wait and see if she will be able to impress fans with her music, along with her clothes and makeup.
___________________
Singer Lee Hyori is back with her fourth album. Her dramatic makeup and costumes have surprised fans, but will she be able to wow everyone with her music as well? Lee's album is now available online and at major record stores.
/ Courtesy of Mnet Media

"Will Lee Hyori's Magic Work Again?"
by HanCinema is licensed under a Creative Commons Attribution-Share Alike 3.0 Unported License.
Based on a work from this source