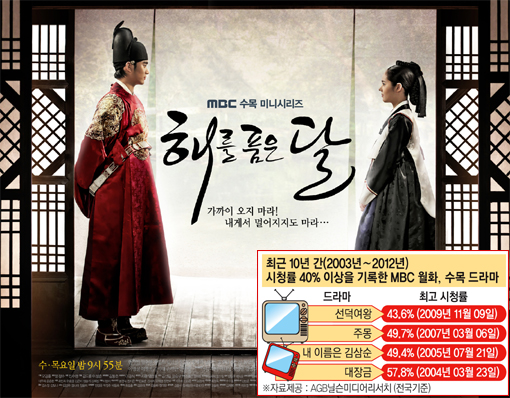 More than 32% within eight episodes...MBC strike is a variable

Will it be another drama with a viewing percentage of more than 40%? This is not a pointless question seeing the way MBC drama "The Sun and the Moon" is going right now.

"The Sun and the Moon" stepped over 30% within 25 months of the MBC drama "Queen Seon-deok". Despite the fact that dramas nowadays don't even go over 20% easily, "The Sun and the Moon" hit the point of 31.2% in eight episodes. It is very possible that the numbers may rise with the drama only just spreading out its story and with the climax coming up.

Even with the wider selection of dramas from the three broadcasting companies, there aren't many dramas that recorded more than 40%. KBS "Bread, Love and Dreams" was the last on the 16th of September 2010 and SBS "Stairway to Heaven" on the 5th of February 2004.

There is a big variable in the breaking through of 40%. The MBC Labor Union revealed that it was going on general strike for the resignation of CEO Kim Jae-cheol on the 30th from 6PM. However, "The Sun and the Moon" production Pen Entertainment revealed, "There should be no mistake in the broadcasting of "The Sun and the Moon".

However, not much of the drama has been pre-recorded so if the strike goes on for more than a week the next week's episode should be difficult.

"Will "The Sun and The Moon" step over 40%?"
by HanCinema is licensed under a Creative Commons Attribution-Share Alike 3.0 Unported License.
Based on a work from this source