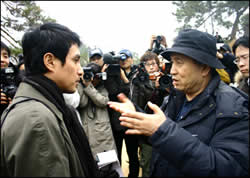 The film's production was once on the verge of cancellation due to the sudden pullout of the original investment and production company and he had to start again.

"Misfortunes have turned into a blessing in the end", Im said Saturday during a news conference in Changhung, South Cholla Province, where the movie is being filmed. "Things have gotten much better now thanks to all the support".

As he found it one of the most difficult moments of his film career over the past 40 years, he said he was just happy that he could finally shoot the film thanks to all the support and modestly expressed his gratitude toward those who flocked to the location to celebrate the shooting of his movie.

A shabby house was built on the outdoor set. It stands on reclaimed land surrounded by a range of mountains, which resemble the shape of a crane spreading its wings. On Saturday, some hundred reporters, residents of Changhung and people from the local film industry crowded the tranquil place.

"Actually, I was going to make the 100th film without fuss. But everybody has kept reminding me of the number, which was quite stressful. Since I have never made a film receiving this much support and attention, I think I really have to make a quality film", Im said.

"Chonnyonhak" is a follow-up of the successful 1993 film "Seopyeonje", a story about singers of pansori, or Korean traditional music. The new film occurs 30 years after the story of "Seopyeonje" ended and the separated brother and his stepsister reunite.

The scene that was shot on Saturday was the opening scene when Dong-ho arrives at an old town and meets his stepsister Song-hwa after a 30-year separation.

But Im was only able to put two stories in the film as he felt technology limited the ability to fully express the dreamy feelings in "Songhakdong Nagune", which is the main reason he delayed production until now. "Chonnyonhak" is a name for the story's film version.

"You can't simply forget about a story that you wanted to make into a film. Now I think it's time to make it into a film as I have somehow enough time to understand the essences in the story, and thanks to the advance in computer technology, I think I could do a cinematic expression for it", Im said.

As he is also fully aware of the high expectations for his 100th film and its meaning, he said he wanted to show something different from previous works.

"I don't think my ability has suddenly improved ahead of making the 100th film. But I think I have to take this opportunity to advance a step ahead", Im said.

Although "Chonnyonhak" has continuity from "Seopyeonje", its main focus will be completely different, Im said. "I don't want this film to be an epigone of `Seopyeonje'. I believe it should be different and upgraded from it",

Basically, the film will be a tragic love story between a stepsister and brother, but through their relationship, he said he wanted to talk about love, which he has never dealt with in his previous works.

In terms of music, "Seopyeonje" put a great emphasis on introducing the beauty of Korean traditional music in cinematic expression, but "Chonnyonhak" will use contemporary music and seek a balance between the sound of traditional and modern instruments, Im said.

Im plans to compete the film by December and release it in May next year.

"With 'Chonnyonhak' Im Kwon-taek Reaches 100 Films"
by HanCinema is licensed under a Creative Commons Attribution-Share Alike 3.0 Unported License.
Based on a work from this source