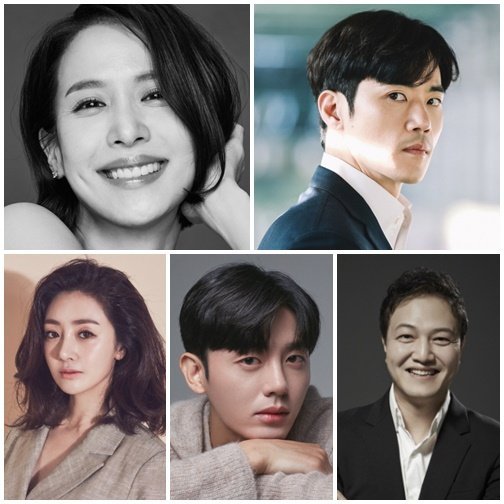 "Woman of 9.9 Billion" has completed its casting.

The new KBS 2TV drama "Woman of 9.9 Billion" has finalized a cast of Cho Yeo-jeong, Kim Kang-woo, Jung Woong-in, Oh Na-ra and Lee Ji-hoon-I. With such a strong line-up the drama increases anticipation.

"Woman of 9.9 Billion" is about a woman who coincidentally finds 9.9 billion won and fights the world. This woman had no hope in her life when 9.9 billion won in cash lands in her hands. The woman has to fight the world and survive strongly in the face of an unshakable desire to defend 9.9 billion won from greedy human beings.

Cho Yeo-jeong tackles the role of Jeong Seo-yeon, a woman who lives a miserable life after she chooses marriage to run away from an abusive father, but suffers abuse from her husband, and ends up with 9.9 billion won in her hands. Cho Yeo-jeong starred in "Parasite", which is a Palme d'Or winner at the Cannes. Through "Woman of 9.9 Billion", she plans on transforming into a character who has to become stronger to survive.

Actor Kim Kang-woo, who has a wide spectrum of acting, takes on the role of Kang Tae-woo, a former detective known as 'the mad cow' who degenerates into a puppet boss of an establishment. Once his brother dies, he looks into the truth of his death and ill-fatefully meets Jeong Seo-yeon. Jung Woong-in is Jeong Seo-yeon's husband, Hong In-pyo. With the mentality of a victim, he turns into an evil character like never before and beats his wife all the time.

Oh Na-ra from "SKY Castle" is Jeong Seo-yeon's rich friend, Yoon Hee-joo, who she has a delicate relationship with, and chairman of Woonam Foundation. She is expected to turn cold as ice, once again breaking the record for best character yet.

Lee Ji-hoon-I plays Yoon Hee-joo's husband, Lee Jae-hoon, who struggles to survive as the son-in-law of a chaebol family. Lee Ji-hoon-I has always had a gentle image until now, but many are interested to see how he will portray Lee Jae-hoon.

Kim Soo-mi tackles the role of Jang Geum-ja, the teacher and mentor who teaches Jeong Seo-yeon money laundering, and Myeongdong's legendary loan shark. Seo Hyun-chul is Oh Dae-yong, a gangster and loyal friend to Kim Kang-woo's character. There are also rookies such as B.A.P's Yoo Young-jae and actor Shin Soo-hyun.

"Woman of 9.9 Billion" is directed by Kim Yeong-jo and written by Han Ji-hoon. It begins in November.

""Woman of 9.9 Billion" Completes Casting With Cho Yeo-jeong and Kim Kang-woo"
by HanCinema is licensed under a Creative Commons Attribution-Share Alike 3.0 Unported License.
Based on a work from this source