Women at the Helm at CJ, Shinsegae 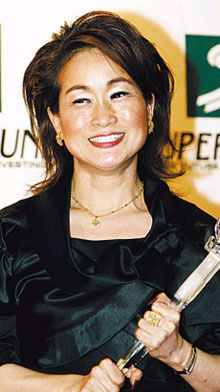 Two granddaughters of Samsung Group founder Lee Byung-chol wield tremendous power in the CJ and Shinsegae groups, which are affiliated with the Samsung conglomerate. The epicenters of power are CJ Group vice chairwoman Lee Mi-kyung and Shinsegae vice president Chung Yoo-kyung. Lee is a core part of CJ's management who leads the group's new growth businesses of entertainment ventures. Chung was promoted on Tuesday from managing director of the Westin Chosun Hotel to vice president of Shinsegae.

Lee, the daughter of Lee Maeng-hee, the eldest son of the group founder, is behind the successes. She has said that the marketing of Korean entertainment products abroad stands or falls with how they are packaged. A stalwart supporter of "Super Star K", which had a production budget of W4 billion (US$1=W1,154), she faced fierce opposition from other executives. Shin Dong-hui, an executive director at CJ, said Lee's perseverance "was the main factor that led us to mobilize all of our resources to produce the W4 billion program when it usually costs only hundreds of millions of won to make a program for a cable channel".

Shinsegae's Centum City shopping mall in Busan is said to have shifted the dynamics of the local department store industry. The woman responsible for that feat is Chung, the vice president. When she was an executive director of the Chosun Hotel, Chung traveled to shopping malls in Dubai, Europe, Japan, and Las Vegas and New Jersey in the U.S. to develop the concept for Centum City. Her on-site research, ranging from the types of customers to the materials used to decorate the malls, was reflected in the mall's creation.

Chung is expected to handle advertising and marketing at Shinsegae. "All I want to do is create a comfortable environment where the people in our company can try new things", she said. Her colleagues say Chung has keen business instincts and puts more importance on substance rather than appearance. She prefers to go out into the field rather than work in her office, having learned that skill from her mother, the Shinsegae chairwoman Lee Myung-hee.

Lee Myung-hee often spends more than three months a year overseas to study trends and practices of the retail industry in advanced countries, and her daughter always accompanies her. Chung majored in art at college and has also been involved in Shinsegae's import fashion business as well as management of the Chosun Hotel.
__________________
Lee Mi-kyung