Women's Characters Are Front and Center in Dramas 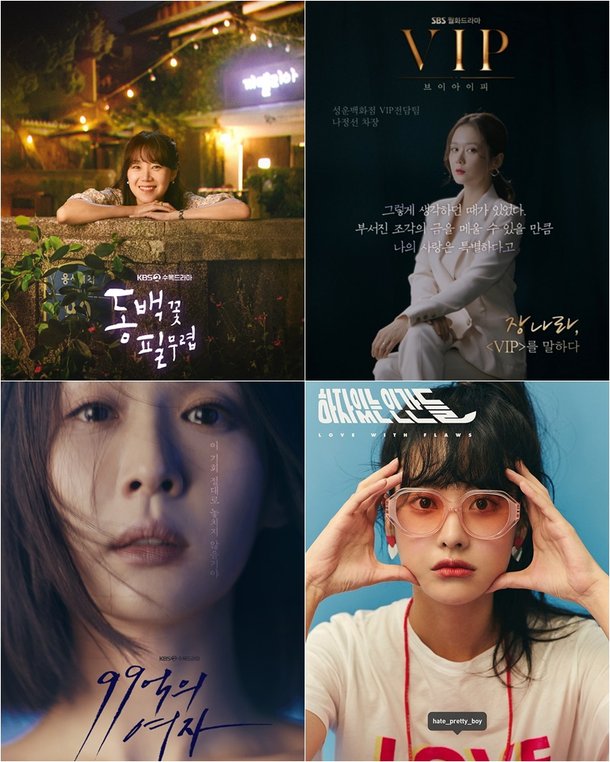 The special nature of TV drama in the year 2019 is the remarkable woman-dominated dramas with women in the lead. Some examples are the KBS drama "When the Camellia Blooms" (Gong Hyo-jin), "VIP" (Jang Nara) and "Woman of 9.9 Billion" (Cho Yeo-jeong). There is also "Diary of a Prosecutor" (Jung Ryeo-won). According to professional agencies, the woman-dominated dramas mark high in viewership and topic, dominating the small screen and sufficiently overwhelming the popularity of man-dominated dramas.

Female-dominated dramas are going strong. What has changed TV dramas? What are the viewers' reactions to this? When "When the Camellia Blooms" began, male viewers responded with sarcasm. The same happened with other female-dominated dramas. Most reactions are the vague fear, irritation, and nervousness of male viewers of women being at the center and showing self-reliance. Some people mentioned feminism and said they cannot see women floundering in "strange" beliefs.

Why are they reacting so sensitively to woman-dominated dramas? That is rejection towards feminism. Some men even show sensitivity with the word itself. What is it about the word that they hate so much? In fact, it doesn't matter what feminism is. They just hate talking about the reality of women through feminism and talking about self-reliant women.

It is true that there have been few woman-oriented dramas. This is due to the increased cost of producing dramas, and the fact that genre dramas are naturally safe. This is because they put up historical dramas, that have no choice but to put a male role on the front page, and man-oriented dramas such as political, legal, criminal, action and noir have become more in demand. The drama environment is sufficiently man-dominated with the narrative structure in which men with grim faces run, strike and fight.

Under these circumstances, women's characters have to play only limited roles. Most of the passive and targeted roles were viewed from the perspective of men. The woman's character was propped up and portrayed as being motivating for the male lead, a role waiting for help, a man's wife or lover, and a being to be protected.

The latest women-centered dramas are a journey to regain lost humanity and they are efforts to solve the myriad problems encountered in a long patriarchal society, careers and relationships with families, contraception, spouses or partners. It should also be read as a message to develop an unequal and absurd society into a more democratic and equal one.

Some blame the production for the negative portrayal of women's characters. This is because there are more male producers than female producers. Therefore, it is interpreted that women's characters in dramas are often interpreted from a male perspective rather than in a realistic way. However, fatal errors are hidden in this interpretation. How do we explain that most of the writers of the mega-hit dramas, which have been popular so far, were women?

The answer lies in the MBC drama "Love With Flaws". This drama shows the process through which a woman (Oh Yeon-seo) who hates pretty men and a man (Ahn Jae-hyun) who is obsessed with his looks, overcome their flaws. The camera's focus is on Oh Yeon-seo and the way she treats her brothers and male classmates. Oh tries to overcome men's prejudice against women amongst these men. Each of the processes is a woman's own behavior, and there is no reason for her to be criticized.

Now we have to pay attention to the essence of women-oriented dramas. The essence is a cultural phenomenon in which dramas are produced and consumed in the eyes of women who see the world, love and themselves. Note that the code of 'gender' (social gender) appears on the forefront of the dramas. Therefore, gender conflicts by men and generational conflict by older generations are not desirable in terms of the scalability of the drama materials. A debate regarding the work seems much better than the fierce battle that goes on in the internet space.

The important thing is that women have long been the centerpiece of drama consumption. In other words, the values of women who have always been excluded in dramas have slowly begun to occupy the center of TV dramas. It was not easy just a few years ago for most dramas to be invested in as women-oriented dramas when the broadcasting environment centered on outsourced producers. The world has changed.

What the viewers want now, after all, is for the term 'women-centered drama' to disappear. It means it is time for women's epic dramas to be recognized as universal dramas, breaking away from the category of 'women'. It's time to think about how to get our message across in a more special, refreshing way, rather than a drama that was made by following something.

"Women's Characters Are Front and Center in Dramas"
by HanCinema is licensed under a Creative Commons Attribution-Share Alike 3.0 Unported License.
Based on a work from this source