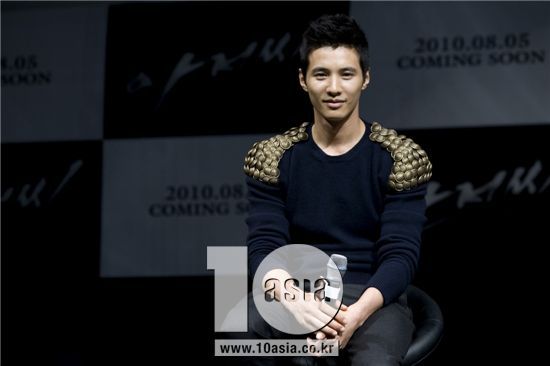 Korean actor Won Bin at a press conference for film "The Man From Nowhere" held at Seoul's Apkujung CGV multiplex on July 8, 2010. [photographed by Lee Jin-hyuk/10Asia]

The saying 'actions speak louder than words' could work as a tagline for Korean actor Won Bin, who used frequent and fancy action movements to deliver the emotions of his title character Tae-shik in the film "The Man From Nowhere".

However, as explained by Won Bin and director Lee Jeong-beom during a Q&A session, all that action is the way in which the quiet and reclusive Tae-shik, a former special agent who runs a pawn shop and befriends the young girl next door, expresses his emotions.

When the girl, his only connection to the outside world, gets kidnapped by the mob as hostage to her mother's involvement in a crime, Tae-shik has no choice but to come out from hiding and fight the criminals in order to save her life.

Lee said that "action is not just action" in the pic, meaning the actions serve as Tae-shik's words and contains his emotions. "Tae-shik is a man of very few words and I thought that he could also use his body to speak his mind. And I wanted the action to seem more than action and rather be heard as his words".

"The film is an action drama, so action is very important and takes up a lot in the movie", remarked Won Bin. "But my biggest concern was how to deliver Tae-shik's emotions to the audience -- how this one man gives up everything he has in order to save the little girl -- and I worried about that more than about the action scenes".

But in all honesty, Won is not an obvious choice for an action film as he has long been known for his pretty looks and for having a certain vulnerability about him. In his previous films, the actor had played 'soft' characters who were adored and cared for by his brother ("Taegukgi: The Brotherhood of War") or mother ("Mother - 2009").

Lee however, thought this would work in his favor. "From what has been exposed in the media, he has an image as someone who is weak, vulnerable and delicate. I thought that image could work as an advantage in this film for when his character builds an emotional connection with the young girl".

Lee added that he cast child actress Kim Sae-ron for the role of So-mi, the girl next door, after seeing her in the critically acclaimed film "A Brand New Life", which was released last year and shown at many international film festivals.

The young actress, praised by Lee and Won for her acting as well as her mature demeanor, described her co-star as "a caring person" but drew a laughter when she said she did not know who he was when she first got the job.

"The Man From Nowhere" opens in Korea on August 5.

"Won Bin speaks with action in new film "The Man From Nowhere" "
by HanCinema is licensed under a Creative Commons Attribution-Share Alike 3.0 Unported License.
Based on a work from this source