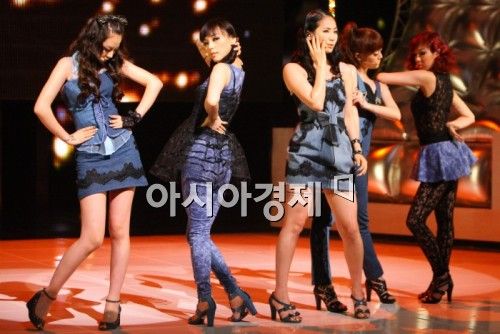 The girls became emotional when they were announced winners for the week, defeating Rain's boy band MBLAQ for the No. 1 title.

"I would like to thank the people at the agency who worked hard and our fans", said a teary Sun.

New member Lim also remarked, "Thank you for giving me an award like this.. I will work hard".

Wonder Girls recently made a splashing comeback to the local music scene with "2 Different Tears", their first full-length album since "The Wonder Years" in 2007.

The girls arrived in Korea last week and has been making appearances on various TV shows to promote the record.

They will be wrapping up their schedule in Korea this week and leave for the U.S., where they will go on a 20-city tour across the country.

"Wonder Girls crowned No.1 on "M! Countdown""
by HanCinema is licensed under a Creative Commons Attribution-Share Alike 3.0 Unported License.
Based on a work from this source