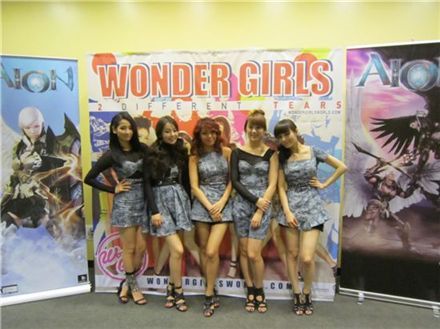 Korean pop sensation the Wonder Girls held a showcase and fan meeting at a major gaming show in the United States over the weekend.

According to a press release from the girls' agency JYP Entertainment (JYPE) on Tuesday, the girls were invited by 3D game company, NCsoft, to perform on stage at the EMP (Experience Music Project), part of the PAX (Penny Arcade Expo) Prime 2010 which was held in Seattle of Washington on September 3.

They performed their hits song "2 Different Tears", "Tell Me", "So Hot" and "Nobody" as well as meeting with about 150 fans after the show for a photograph session.

"The Wonder Girls are the first ever Asian singers to have performed on the PAX stage", an official from PAX was quoted as saying, adding that it was "a great performance and the audience was happy".

An official from JYPE explained that it was the second time for the group to see and spend time with their fans in Seattle. They were in the city on June 31 as one of the stops for their U.S. tour.

PAX, created by webcomic "Penny Arcade" authors Jerry Holkins and Mike Krahulik, is a semi-annual gamer festival held in both Seattle and Boston. It first open in 2004 which focuses on console games, computer games and tabletop games.

Wonder Girls -- originally composed of Sohee (Ahn So-hee), Yubin, Sun, Yenny and Mimi -- made their debut in Korea in 2007 and rose to stardom with their hit songs "Tell Me", "So Hot", and "Nobody".

They relocated to the U.S. with JYPE producer Park Jin-young to break into the American pop scene and were the opening acts for popular boy band Jonas Brothers in the summer of 2009. They ventured on to appear in various TV shows and gained recognition in the country

The quintet, with new member Lim who replaced Mimi after she left the group in February, returned to the local music scene with their international released album "2 Different Tears" in May 18 and embarked on their U.S. tour in early June.