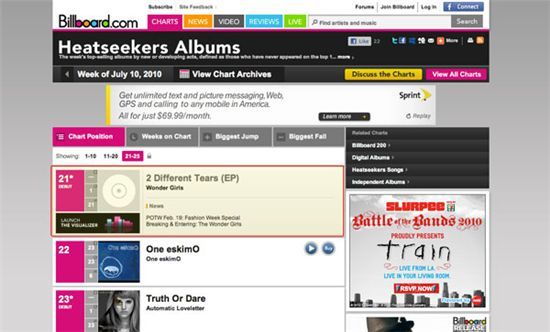 Korean pop sensation Wonder Girls have made their second Billboard chart entry with their latest single "2 Different Tears" (2DT), according to the band's official website (http://wondergirlsworld.com).

For the week of July 21, "2DT", the title single from the band's second studio album of the same name, came in at No.21 on Billboard's Heatseekers Albums chart, which ranks top-selling albums released by new or developing artists.

The members appeared ecstatic over the latest chart entry, their first since placing the U.S. debut single "Nobody" at No.76 on Billboard Hot100 last October. Wonder Girls are the first and only Korean artists in history to enter the prestigious pop music chart.

Member Yenny posted a comment on her Twitter page, saying "We reached No.21 on the Heatseekers Albums chart.. Thank you so much for loving our songs and supporting us".

Wonder Girls -- originally composed of Sohee (Ahn So-hee), Yubin, Sun, Yenny and Mimi -- debuted in Korea in 2007 and quickly became one of the most successful pop groups in the country with three consecutive No. 1 singles, "Tell Me", "So Hot", and "Nobody".

At the height of their popularity in Korea, the girls relocated to the U.S. with producer J.Y. Park to break into the American pop market and began working as a virtually unknown pop group from Asia.

Their hard work paid off as the girls scored an opening gig for popular boy band Jonas Brothers' U.S. summer tour, appeared on several TV shows and have been steadily gaining recognition in the country.

The quintet, with new member Lim replacing Mimi after she left the group in February, recently made a splashing comeback to the K-pop music scene with "2 Different Tears", their first full-length album since "The Wonder Years" in 2007.

The girls returned to Korea in late May to promote "2DT", which topped various K-pop music charts upon its release. The single was recorded in Korean, Chinese and English.

Wonder Girls have currently resumed their 27-stop U.S. tour, which was put on hold last week due to the death of member Sun's father. He passed away on June 24 with a chronic illness.

"Wonder Girls make Billboard chart again with "2DT" "
by HanCinema is licensed under a Creative Commons Attribution-Share Alike 3.0 Unported License.
Based on a work from this source