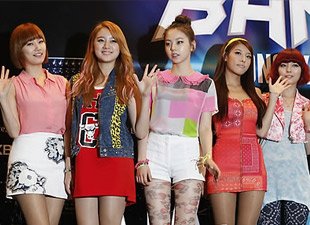 Amidst the London Olympics, the Musical Olympics is also in full swing!

The most representative music ranking chart in the US, the Billboard charts announced the top 40 musicians in the world on July 30th (local time) for the Musical Olympics: 40 Countries' Top Stars.

After compiling all the Billboard figures to date, the most representative singers from countries all over the world were picked out.

Billboard's pick for Korea was the idol group Wonder Girls. After releasing the English version of the megahit song "Nobody" in 2010, they became the first Korean group to make it onto the Billboard Top 100.

Other acts named for this honor were Rihanna for Barbados, Celine Dion and Justin Bieber for Canada, Bob Marley for Jamaica, the Beatles for England, Santana for Mexico, and Nicki Minaj for Trinidad and Tobago.
Representing the US were Elvis Presley, Madonna, Michael Jackson, and Garth Brooks.

"Wonder Girls Named As Korea's Pick For Billboard Musical Olympics"
by HanCinema is licensed under a Creative Commons Attribution-Share Alike 3.0 Unported License.
Based on a work from this source