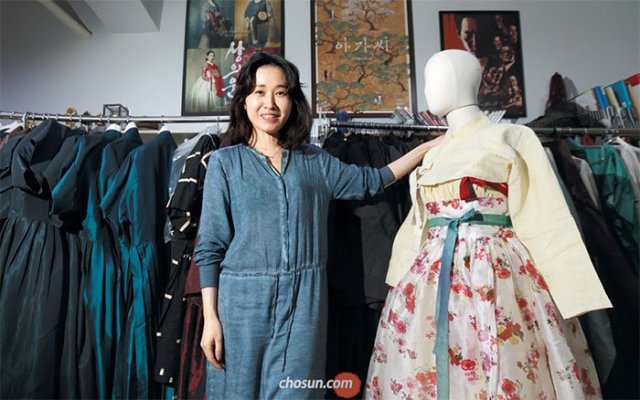 Cho Sang-kyung is one of the most sought-after costume designers in Korean cinema, and the country's most celebrated directors line up to work with her.

Besides regular work for Park Chan-wook, she has designed costumes for Kim Jee-woon, Choi Dong-hoon and Ryoo Seung-wan. Many big Korean hits have her stamp on them, from "A Bittersweet Life", "Old Boy" and "Sympathy for Lady Vengeance" to commercial fare like "The Host" and "Tazza: The High Rollers".

This summer, her costumes can be seen in two of the most anticipated Korean movies of the year -- "The Battleship Island" and "A Taxi Driver" -- as well as the musical "Arirang" at the Seoul Arts Center.

Cho is passionate about the importance of her role. "Actors often only care about what they wear and can't see the big picture", she says. "And film directors often lack the eye or simply need objective advice from a third party. A balance of set, costume, and lighting is very important, so visually expressing the story and characters is to a great extent up to the designers".

Over the last 15 years, she has worked on over 100 films, TV dramas, plays, and concerts.

What was it like at the start? "I was confused, lost, and unemployed. I'd dreamed of being an artist since I was little, but it wasn't until I was well into my 20s that I realized that my talent doesn't extend that far", she says. "I gave up on studying abroad and becoming an artist. I was confused, but decided to take on whatever work I can find to gain experience".

The most important aspect of her job? "Textures are important, but actors come first. Costumes should fit and be comfortable. Good costumes complement acting and are so comfortable that the actors forget that they are wearing them".

She is divorced from actor Oh Man-seok, who accepted her best costume award on her behalf at the 2014 Grand Bell Awards. "We're divorced but we're still good friends", Cho says. "Our daughter, who's in third year of middle school, always tell us off. She wonders when we'll grow up. We support each other and wish each other well".

"Work Never Stops for Korea's Top Costume Designer"
by HanCinema is licensed under a Creative Commons Attribution-Share Alike 3.0 Unported License.
Based on a work from this source