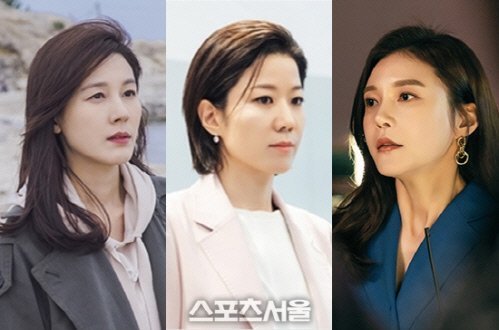 Dramas with a variety in subject matter are filling up the small screen. It's even more fun watching the actors' performances. Among other things, the performances of actresses who have returned from a long hiatus stand out.

Kim Ha-neul from jTBC's "The Wind Blows", Jeon Hye-jin-II from tvN's "Search: WWW" and Cha Ye-ryun from the KBS 2TV drama "Perfume" all share the common factor of being working moms. They have all found places in the dramas as key figures and opened a second chapter of their acting careers.

Kim Ha-neul from "The Wind Blows" was last in a drama called "Road to the Airport" 3 years ago. She got married and had a beautiful baby girl last year. Yet she came back with the specialty of a romance drama. "The Wind Blows" is the story of a man and a woman who fall in love again after breaking up, and protect their love from yesterday's memories and tomorrow's love. About coming back, Kim Ha-neul said, "It's not very much different. My life is my private life and I choose my work regardless of that, as I have all along. My attitude towards my work doesn't change". Like she said, marriage and birth don't affect her acting. In fact, she's increased immersion for the drama by acting out a married woman with children.

"Search: WWW"'s Jeon Hye-jin-II (Song Ga-kyeong) plays the CEO of a portal site named Unicon. In recent episodes, she declared divorce with her husband, who she married for convenience, and counter attacked the rivaling portal site. Ga-kyeong has always been pitiful throughout the drama, but her character and circumstances are about to change. Jeon Hye-jin-II is one of the busiest actresses not just in drama, but in film too. She made an impression in the 2014 film "Apostle" and then "The Merciless". She even had the honor of going to Cannes. She also starred in "Hit-and-Run Squad" and "The Beast" this year. The actress with two sons appeared in "Misty", her first drama in 11 years, last year and has been active ever since. Her husband, Lee Sun-kyun, has shown his support for her hard-working life in several interviews.

Finally, Cha Ye-ryun (Han Ji-na) from "Perfume" is in her heyday too. After she married actor Joo Sang-wook, she took 4 years off and had a baby. In the KBS 2TV drama "Perfume", she plays a retired model and CEO of a model agency. Her 'cold' image and fancy styling draw the eye. She says she gained up to 25 kilograms after she got pregnant, but she worked hard to return to her regular physique, and looks more beautiful than ever. "I've been gone for 4 years and yes, I was scared. Things are definitely different now that I'm a wife and a mother. My husband likes it when I act. It makes me feel like he has my back".

In the past, there were words of concern if an actress got married, and it was even more true about getting pregnant and having a child. It 'interrupted' their career. However, the prejudice about these factors being a holdback for actresses no longer exists. They take over dramas with their own name and are not called someone's mother or wife. They are in line with modern times and balancing between their career and their role in their families. It's great to see these 'superwomen' back in action.

"Working Mom Stars Kim Ha-neul, Jeon Hye-jin-II and Cha Ye-ryun"
by HanCinema is licensed under a Creative Commons Attribution-Share Alike 3.0 Unported License.
Based on a work from this source