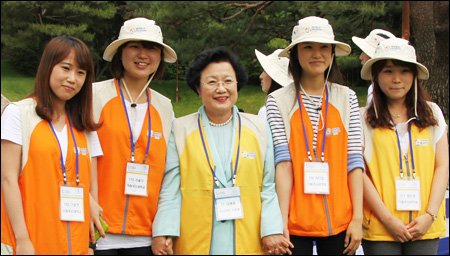 More than 550 volunteers of World Friends Korea (WFK) shared their overseas volunteer work experience and discussed how the program should develop at a ceremony celebrating the third anniversary of its launch that took place at Cheong Wa Dae, Friday.

The event was organized by the Presidential Council on National Branding and the Korea International Cooperation Agency (KOICA).

WFK is a government-run overseas volunteer organization, which unified seven separate volunteer programs previously operated by five ministries. It was launched in 2009 and since last year, private enterprises and non-government organizations have participated.

Ranging from high school students to retirees, those who joined the program took part in the ceremony to review and recount their volunteer experience, along with dignitaries including President Lee Myung-bak, first lady Kim Yoon-ok, the council Chairwoman Lee Bae-yong, Foreign Affairs and Trade Vice Minister Kim Sung-han and KOICA President Park Dae-won.

President Lee and the first lady were appointed as honorary members of the WFK. "We need to learn from them, rather than thinking we teach them", Lee said.

The WFK has dispatched volunteers in various fields, including education, sanitation and hygiene, and IT. It plans to send 4,368 volunteers overseas this year, with an aim of sending 20,000 in total by 2013.