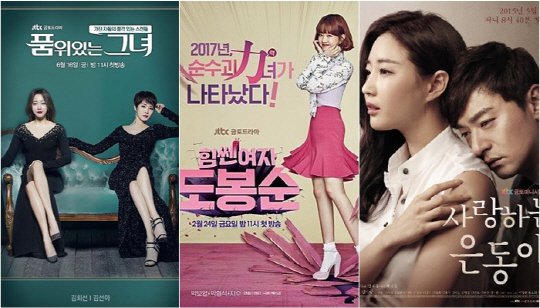 She's a savior to JTBC.

Writer Baek Mi-kyeong's JTBC drama "Woman of Dignity" is climbing higher and higher. It started off with 2.044% on the 16th of June.

Kim Hee-sun and Kim Sun-ah's hard carry performance as well as director Kim Yoon-cheol's sensitivity in the drama are a few reasons why the drama is doing so well but the strength of the message it delivers is a main reason. Also, Baek Mi-kyeong's unique writing in which she depicts her characters three dimensionally is enough to steal the show.

Baek Mi-kyeong has also tasted success with the previous "Strong Woman Do Bong-soon". the drama is a romantic comedy about Do Bong-soon (Park Bo-young), a character with amazing strength, crazy Ahn Min-hyeok and In Gook-gu (Ji Soo) who is bound with justice.

JTBC has put forward numerous dramas with diverse genres so far but despite their good reviews animosity for the channel JTBC negatively influenced their results. However, staring with "Strong Woman Do Bong-soon" which rated almost 4%, reached 8% by the fourth episode and recorded a shocking 9.8% which was more than the record holder "Childless Comfort".

Baek Mi-kyeong's power of writing revealed its potential in her first feature drama "My Love Eun-dong". This mellow drama about a man's love for a single woman for over 20 years resulted somewhere around 1% but the affectionate story line created a fan line.

Baek Mi-kyeong is now known as 'the Kim Eun-sook of JTBC. JTBC recently gave her a plague of appreciation.

"Writer Baek Mi-kyeong is the Kim Eun-sook of JTBC"
by HanCinema is licensed under a Creative Commons Attribution-Share Alike 3.0 Unported License.
Based on a work from this source