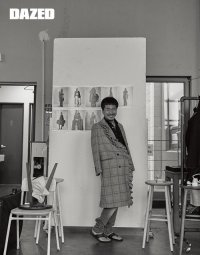 He seemed a little out of breath from running around the film festival circuit.

A year since making a mark on the cinema map with "Breathless", director-actor Yang Ik-june cast off his hardboiled image to play a goofball in "Runaway from Home", which is now showing in theaters.

"Wow it's already been a year, exactly", the 34-year-old said, pensively gazing out the cafe window during a recent interview with The Korea Times in southern Seoul.

"I lived a year as if it were 10 years", he said about being invited to 60 film festivals and picking up 23 prizes, as he burst into one of his hysterical laughs. The film, a partly autobiographical story about domestic violence, is now showing in Japanese theaters, and is waiting to be released in Canada and France. He will soon be traveling to Poland to attend another film festival.

One may have expected him to take a long vacation. But for Yang, shooting "Runaway from Home" was his break. His supporting role opposite hallyu star Ji Jin-hee and funnyman Lee Moon-shik was palpably less burdensome compared to doubling as a producer and director as he did for "Breathless".

"I only had to act and didn't need to worry about anything else", he said. "If I didn't shoot `Runaway from Home', I would have drowned in the stress. There were so many things to take care of and worry about, like taxes. There was nothing I did on my own will during the past year", he said.

In the comedy, Yang stars as Dong-min, an aspiring filmmaker that helps his friend (Ji Jin-hee) look for his wife who has disappeared after leaving a goodbye letter. The buddies, however, become increasingly lost as the search reveals more and more uncanny facts about the woman in question ― who also happens to be Dong-min's ex-girlfriend ― and things become more complicated when a con man (Lee Moon-shik) who claims to be her brother joins them.

After Yang shot to stardom, scripts started pouring in but he declined the roles. He waited a week ― "out of laziness" he said ― to read the story penned by its director Lee Ha.

"Reporters are always underwhelmed when I say that there wasn't anything special about my choice. Things just fell into place, and it was a fun project", he said.

"There were a lot of cuts", he said, recalling the shoot. Indeed Yang's droll character gives the film life and substance ― and compensates for the discomfort that some members of the audience may feel while watching Jin's mismatched screen persona.

When it comes to acting, Yang upholds the notion that actors, ironically, should not act. "I hate those words, acting or transforming. You reach inside yourself and use what's already in you. You can't transform, say, vitamins to cigarettes", he said. In short, fictional characters are ultimately an extension of the actor himself.

So how does he relate to his character? Contrary to the reputation earned from his previous work ― of being a penniless director-actor who moved three times to fund "Breathless ― he said he never aspired to become a director like Dong-min. But he said he had a ball playing the role. "The director was gracious and let me be myself", he said.

Even with a new film showing, the weight of "Breathless" seems to remain on his shoulders. But it has little to do with living up to the success of his feature film directorial/leading role acting debut. It's more about a personal struggle within.

"I experienced so much over the past few months. Something seems to have burst open inside my heart, and I can feel myself evolving. I want to continue developing as a person. I feel confident that I'll be able to persevere through whatever lies ahead, though of course this doesn't mean it'll be all rosy".

No directorial projects, nor anything specific for that matter, are planned ahead. Perhaps he just needs to take a deep breath.

"Runaway from Home" is now showing in theaters. Distributed by Sponge ENT.

"Yang Breathlessly Returns With Comedy"
by HanCinema is licensed under a Creative Commons Attribution-Share Alike 3.0 Unported License.
Based on a work from this source