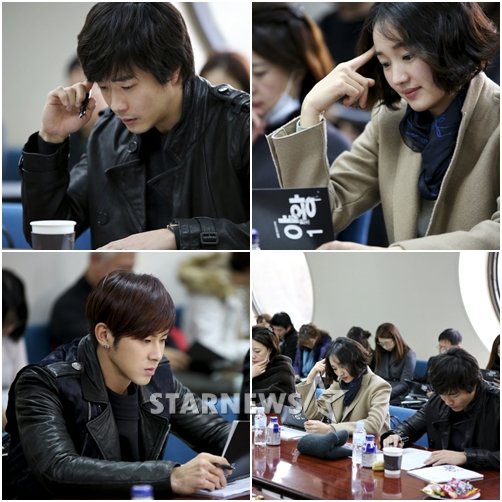 The script reading was held on the 6th for the upcoming SBS drama "Yawang".

After 'hi's' and 'hello's' the reading took place as if it was the real thing.

According to the production, Kwon Sang-soo in the role of Ha-ryu read his part well in the caring voice of a pure man with some comedy here and there. Soo Ae in the role of Da-hae read the script with calamity and at the part with strong emotions, showed detailed changes in her voice.

Jeong Yoon-ho in the role of Baek Do-hoon looked at his sister Baek Do-kyeong (Kim Sung-ryung) and spoke to her as if they were really sister and brother.

Producer Jo Yeong-gwang says, "I am happy with our ensemble. We are all going to work as one thinking we own it".

""Yawang" first script reading"
by HanCinema is licensed under a Creative Commons Attribution-Share Alike 3.0 Unported License.
Based on a work from this source