"Yeah, That's How It Is", writer Kim Su-hyun's script 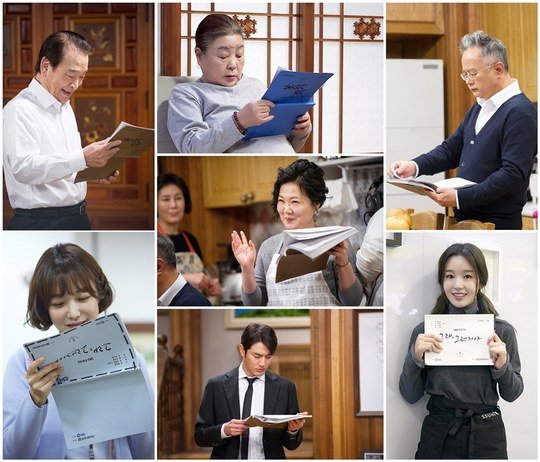 Lee Soon-jae, Kang Bu-ja, Kim Hae-sook, Song Seung-hwan, Jo Han-sun, Shin So-yul and Nam Gyu-ri were seen not being able to put their scripts down. From veteran actors and actresses to the younger generations, they are all deeply impressed by this magic maker's writing.

The "Yeah, That's How It Is" cast has been doing a good job without mistakes. The collaboration between old and new actors and actresses is outstanding.

Lee Soon-jae, Kang Bu-ja, Kim Hae-sook, Song Seung-hwan and other middle aged actors and actresses can't help but smile as they read through their scripts. Jo Han-sun is anxious about his working with such a generation of actors and actresses and so are Shin So-yul and Nam Gyu-ri.

Song Seung-hwan says, "Kim Su-hyun gives us a lot of lines but when I have completely understood and memorized them all, I love acting. The script is open to alterations and as an actor that's a good thing".

Jo Han-sun says, "To shoot a scene in front of the camera, I have to practice my lines and train my image to fit the character I am playing. Acting with such veteran actors and actresses, my efforts are nothing compared to theirs".

Samhwa Networks says, "Every single one of Kim Su-hyun's lines are a life story. That's how all the actors and actresses understand their lines and emotions perfectly before we go into camera action".

""Yeah, That's How It Is", writer Kim Su-hyun's script"
by HanCinema is licensed under a Creative Commons Attribution-Share Alike 3.0 Unported License.
Based on a work from this source