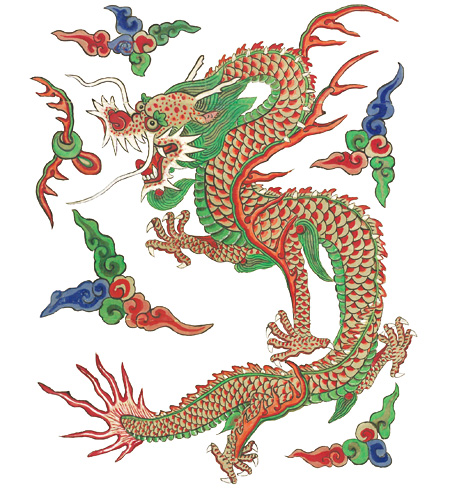 The year 2012 is the Year of the Dragon and the mythical animal, seen in this "Hwangnyonggi", symbolizes power and wealth.(Courtesy of National Palace Museum of Korea)

The animal has a head resembling a camel, eyes of a rabbit, the nose of a pig, ears like an ox, antlers similar to a buck, a snake-like neck, fists as fierce as those of a tiger, the sharp talons of a hawk and scales no different from a carp. There are long whiskers decorating the mouth and a bump in the middle of the head, which allow the animal to fly in the air. In this manner the mythical dragon creature is described in "Boncho Gangmok" (Classified Records of Chinese Medical Botany) originally published in 1596.

Ahead, the year 2012 is the Year of the Dragon, or the Year of Im-jin, according to Chinese astrology, when good fortune is

expected to kick off and ascend into the sky as dragons do.

Year of the Black Dragon 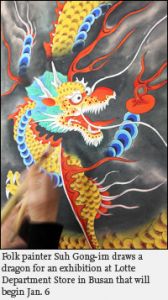 The dragon is the fifth sign and the only fanciful animal in the Chinese zodiac. "The dragon is a cultural being, not a biological animal. It is the most prestigious being with ultimate authority", said Cheon Jin-gi, director general of the National Folk Museum. "Though mythical, the dragon is a familiar animal. There is a saying that people can draw a dragon even though they have never seen a dragon, but they cannot draw a snake even after having seen one".

Among the cyclical years of the zodiac, the year 2012 is the Year of the Black Dragon, as "im" means black and "jin" means dragon according to Korean "Ganji" system, or the sexagenary cycle. The system is a combination of the 12 zodiac animals and the five traditional colors - blue, red, yellow, white and black.

The Year of the Dragon comes every 12 years, but the Black Dragon arrives every 60 years, making 2012 even more special. The birth rate is expected to rise next year, as many married couples will want their baby to be born under the energy of the dignified, powerful black dragon.

The dragon represents power, dignity and majesty. During the Joseon Kingdom (1392-1910), only kings could use the dragon in the palace as his symbol. They wore "gollyongpo", or a dragon robe, drank from bottles with dragon images and carried "Hwangnyonggi", or the yellow dragon flag, when they inspected the army. "Yongsang", or the throne, was decorated with dragon reliefs.

The mythical animal was also popular among commoners as a symbol of power, especially associated with water. In seaside regions, people held "Yongwang-gut", a shamanistic ritual honoring the dragon king that lived in the sea and was in charge of water and rain. They also offer "eobuseum", or cooked rice wrapped in white paper", to the dragon king on the day of the first full moon of the year, wishing for good luck throughout the upcoming year. 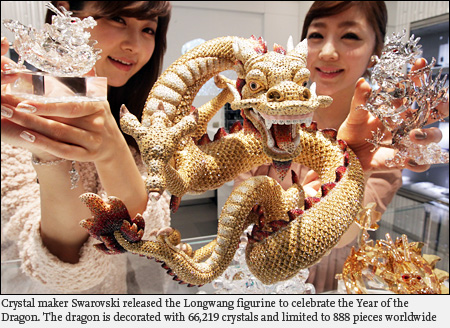 Since the dragon is considered a sacred animal from legends, people always want to see the dragon even in their dreams. D￢ reams featuring dragons are considered auspicious. Especially for dreams foreshadowing the conception of a baby, the dragon was reckoned the best.

In religion, the dragon is one of the dharma in Buddhism, appearing in various places in temples and acts as protector. 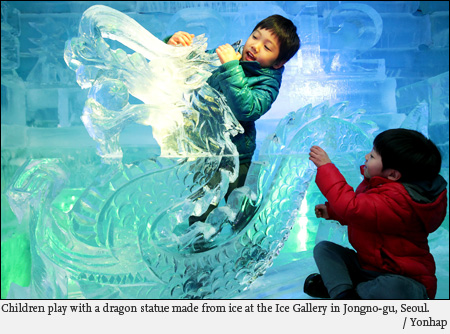 Considered outgoing and active, "dragon people", or those born in the Year of the Dragon, love nature, traveling and have silver tongue.

Full of vitality and vigor, they tend to advance constantly. On the flipside they are also considered egocentric, capricious and reckless. As assertive individuals they are perfectionists with high standards. They do not look back once they set a goal and do not tell lies because of their righteous nature.

Their straightforward, outspoken characteristics are both merits and demerits, but the people born under the Dragon sign sparkle and they illuminate all the people in their midst. 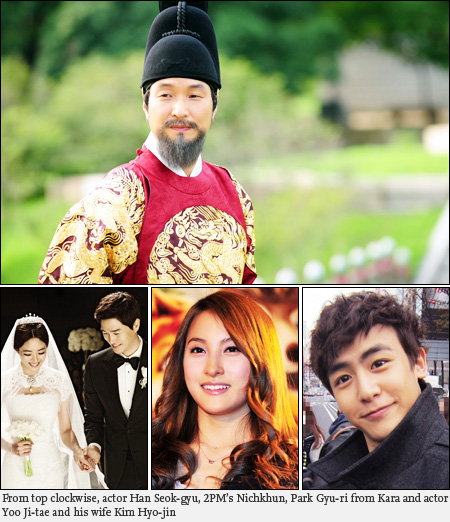 This past year seasoned actor Han Suk-kyu, born on Nov. 3 1964, evinced the rebirth of a dragon star in the drama "Deep-rooted Tree" about the creation of "Hangeul", the Korean alphabet. Han played King Sejong (1397-1450) from the Joseon Kingdom (1392-1910). The drama and Han's performance in it were both highly acclaimed. Many predict that Han will win the grand prize at the 2011 SBS Drama Award today.

"Deep-rooted Tree" was Han's glorious comeback to the small screen after 16 years and marks the end of an almost eight-year slump. The veteran actor actually started his career as a voice actor at KBS in 1990. He then started acting at MBC the following year. He made his mark most significantly with "Shiri" (1999), Korea's first blockbuster film about the volatile two Koreas and a tragic love between secret agents. He also made other hit movies such as "No. 3" (1997) and "Christmas in August" (1998). Currently, Han is cast in the upcoming spy movie, "In Berlin", with Jun Ji-hyun and Ha Jung-woo.

Actor Yoo Ji-tae, another dragon star, born in 1976, brought good news to the public; he wed model and actress Kim Hyo-jin, his sweetheart of five years, on Dec. 7. The couple met while shooting a fashion advertisement in 2003 and started dating in 2006. Yoo expressed his plans to marry Kim when he appeared on the MBC talk show, "Golden Fishery" in March last year.

A group of male stars born in 1976, members of the "Dragon Year Club" have been known for their tight friendship. The members include singers Kim Jong-kook, Jo Sung-mo, Hong Kyung-min and actors Jang Hyuk and Cha Tae-hyun. Yoo Seung-jun, a former Korean singer who was practically ousted from Korea after he obtained American citizenship to evade military service in 2002, was once a member as well.

Adolescent dragons born in 1988 are forging their path as K-pop idols. 2PM's Nichkhun had a great year with the advance of K-pop worldwide. He even appeared on a popular reality show, "Just Married", with Vitoria from girl group f(x), to much favorable feedback from many fans. This is also true for Park Gyu-ri from Kara; enjoying extreme success in Japan, Park is playing the role of movie-turned-musical "200 Pounds Beauty" in the neighboring country and here in Korea. Most of all hordes of fans anticipate the return of Big Bang and its dragon members, Taeyang and G-Dragon.

"Year of Black Dragon"
by HanCinema is licensed under a Creative Commons Attribution-Share Alike 3.0 Unported License.
Based on a work from this source