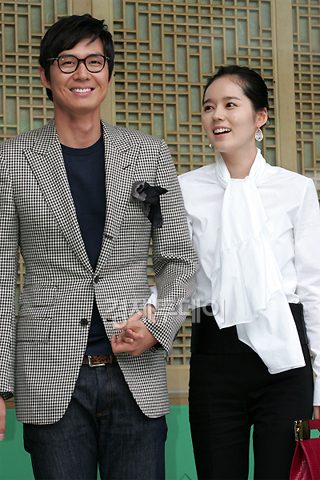 Actor Yeon Jung-hoon and his wife Han Ga-in made a surprise announcement.

Yeon Jung-hoon appeared in a talks how program and revealed his plans for children for the first time in 7 years of marriage with Han Ga-in. he said, "My wife wanted to make a famous work before she became a mother. Our parents know about this too".

He continued, "Since her drama and movie this year were a success, we made plans to have a baby. We will give birth to one in 2013 in the year of the horse like me".

When Kim Soo-mi asked him if he wanted a boy or a girl, he said, "I want a daughter but she wants a son".

Meanwhile, Yeon Jung-hoon mentioned, "We haven't fought that greatly yet in our 7 years of marriage".

"Yeon Jung-hoon announces he wants to have a child in 2013"
by HanCinema is licensed under a Creative Commons Attribution-Share Alike 3.0 Unported License.
Based on a work from this source