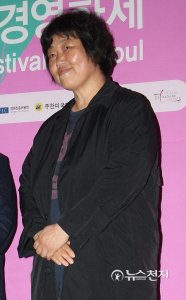 Yim Soon-rye's movies portray the daily drudgery of marginalized people in society in a caring way. Her latest hit was "Forever the Moment", about the Korean women's handball team. She received the 2008 award given to female cultural personalities. The award was established to cultivate women of cultural and social potential. Lim was recognized for providing a new perspective on women's culture as she captured the delicate side of women in a revealing and touching manner in the movie.
She looks after the lowest ranked crew members on the film set like a mother. She is also respected by young fans for her warm charisma. Her movies have the power of comforting the tired and weary.

Born in Incheon in 1969, Lim wanted to be a film director from her high school days, but she succumbed to the social prejudices regarding filmmaking and entered Hanyang University as an English literature major. She studied English throughout university and didn't have time to study film. One day in her junior year, she happened to watch a French artistic film. Back then the Korean film industry hadn't yet commercially advanced. Only a few directors like Im Kwon- taek and Bae Chang-ho were up-and-coming. Women directors were more of a rarity, in this "dark age". When Lim first realized she wanted to make films, she wondered about her future prospects. Film studies in Korea then were just budding and were nowhere in-depth. It was frustrating to study without a proper textbook.

Eventually her academic thirst for cinema brought Lim to Paris, known to be the best place to study the arts. For four years, she watched as many films as she could, to her heart's content. She received her master's degree at the Universite de Paris VIII and debuted on the Korean film scene in 1994 as a producer of Yeo Kyun-dong's "Out to the World". That same year, she won the grand prize at the inaugural Seoul Short Film Festival for her film "Promenade in the Rain" and gained significant attention. It was a quality film about the lonesome and tedious life of a female clerk working at a tiny theater on the outskirts of society. Her potential recognized, Lim then cranked out her 1996 debut feature film "Three Friends" in which she sheds light on the structural absurdities of Korean society through three incompetent and timid boys who are unlikely to adjust to society. Her second work was "Waikiki Brothers" in 2001, a story about a third-rate rock band which received similar reviews to "Three Friends" as expressing a thought-provoking view on the meaning of life. The film garnered an explosive response at the Jeonju and Pusan film festivals.

But when the film actually opened, ticket sales were lackluster as usual, attracting only about 100,000 nationwide. Well-made quality films were shown only for days at theaters due to poor support. This triggered a public campaign to revive art films. Lim also made the documentary "Beautiful Survival" which chronicles the lineage of Korean woman directors starting from the legendary Park Nam-ok to the more contemporary Byeon Young-joo. She also produced "Her weight", a mini film that makes up part of the 2003 omnibus film "If you were me" (or "Six Gazes"), a collaborative work by six Korean women filmmakers themed on human rights. And seven years later, Lim released the smashing hit "Forever the Moment" which singlehandedly ended the doldrums of the Korean film industry, thanks to which she also broadened her fan base.

The characters in her films all seem very different but alike at the same time: the band members who lost their childhood dreams in the wear-and-tear of life in "Waikiki Brothers", the frustration and suffering of young adults, who are neither yet fully adults nor adolescents, portrayed in "Three Friends", etc. Her characters are everyday folks hurt and marginalized in society. In a way the heroes of "Waikiki" and "Three" are quite similar in that they are depressed, quiet, powerless and unwittingly continuing on with life, rather than reacting to, confronting and living real lives. However, they are warmhearted people who care for others around them.

Lim says she doesn't focus on the "awfully handsome, kind, competent" people or those locked in a particular situation who are the favored heroes of the numerous mainstream movies. She highlights everyday people "just like you and me". The beauty of her films is that these ordinary folks are reinvigorated in a new light. Lim has always underlined the peripheral values.

Lim is far more than just a female director in Korea, which itself is a notable accomplishment. She has managed to apply the fresh experimental spirit of short films to feature length movies, which has been considered a taboo. Another important pillar of Korean culture and art is her commitment to independent, low budget, well made films adhering to marginalized, peripheral values. When her films encounter corresponding viewers who have an eclectic taste and are open to diversity, Korean cinema will be able to make a leap forward.