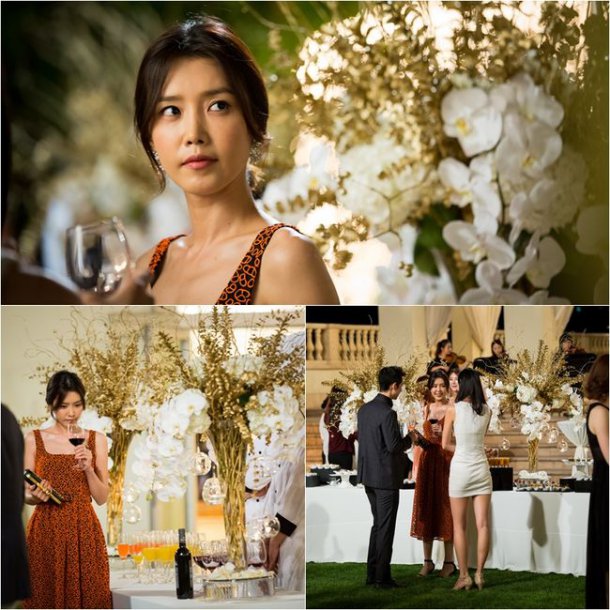 She plays Lee Chae-yeong who disguises herself as a wealthy and ingenuous beauty but has her ears open to everything that goes on in the VIP floor of Hanshin Hospital.

Chae-yeong is a beauty who stole the heart of Do-joon (Jo Hyun-jae), the chairman of Hanshin Group, although she's a character who will betray her husband at any time. She looks like she's crazy about actors and plastic surgery but she's only putting on pretence to find out everything that goes on around Yeo-jin (Kim Tae-hee) who is asleep in the VIP floor.

Chae Jung-an was seen at a wedding hall filming a scene for the drama on the 17th. The scene was of a high class party with Do-joon and Chae-yeong. Their marriage has already been set by their parents and unlike Do-joon who is satisfied, Chae-yeong can't help but look displeased at the situation.

The scene was decorated with fancy interior and props. Chae-yeong is wearing a simple dress which is enough to draw all eyes on her. Being known for her style, Chae Jung-an pulls off the dress well and looks proud and elegant in it.

Chae-yeong might seem materialistic but she craves love the most. The fun of the drama will lay in watching her move with a target.

Meanwhile, "Yong Pal" is a spectacle romance drama about a fraud doctor who will do anything for money until he meets the sleeping beauty heiress in the hospital. The first episode can be seen on the 5th of August.

""Yong Pal" Chae Jung-an becomes a wealthy mistress"
by HanCinema is licensed under a Creative Commons Attribution-Share Alike 3.0 Unported License.
Based on a work from this source