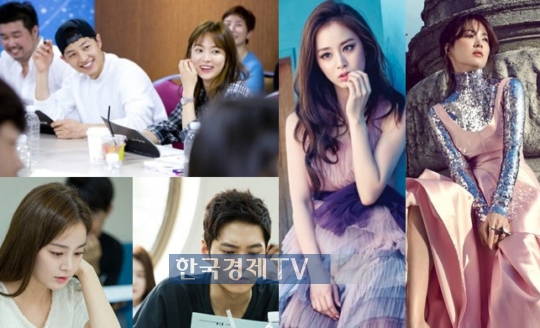 At the script reading session of "Yong Pal on the 25th there were Joo Won, Kim Tae-hee, Jo Hyun-jae, Chae Jung-an and other casts. Producer Oh Jin-seok started the reading by saying, "I'll do my best to make a good drama" and writer Jang Hyeok-rin said, "I trust you all".

Drama "Yong Pal" is about a quack doctor named Yong Pal-yi who would do anything for money, meeting a sleeping heiress in the same hospital. This drama is to be released next month.

Meanwhile, at the script reading of KBS "Descendants of the Sun", there were Song Joong-ki, Song Hye-kyo, Jin Goo, Kim Ji-won and others.

Producer Lee Eung-bok said, "I wonder how I can be in the same room with such great people for such a great drama. It's going to be good and I hope for all the best".

"Descendants of the Sun" is a human melodrama about the youths in this generation to dream of love and success in extreme conditions. This drama is coming this September.

""Yong Pal" Kim Tae-hee VS "Descendants of the Sun" Song Hye-kyo"
by HanCinema is licensed under a Creative Commons Attribution-Share Alike 3.0 Unported License.
Based on a work from this source