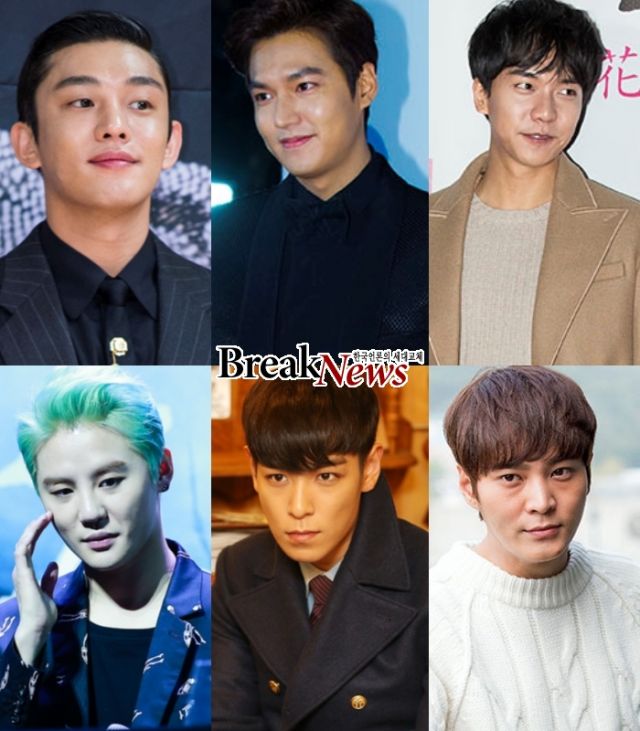 Actors Yoo Ah-in, Lee Min-ho, Lee Seung-gi, Kim Joon-soo, Choi Seung-hyun (T.O.P) from Big Bang, Joo Won and others have the military coming up ahead of them.

First of all, Yoo Ah-in, born in 1986, is on the top of the list. He debuted in 2004 with the drama "Sharp 1" and has been building on his filmography ever since. He's made it big with "Tough as Iron", "Punch", "Veteran" and "The Throne". He's currently performing in the SBS drama "Six Flying Dragons" as Lee Bang-won and is looking forward to the release of the movie "Like for Likes".

In an interview regarding his enlisting, Yoo Ah-in had said he will join duty once the drama is over.

Others that come up behind Yoo Ah-in are Lee Min-ho, Lee Seung-gi, Kim Joon-soo, Choi Seung-hyun, Joo Won and more. They were born in 1987 and they have to enlist by next year.

Lee Min-ho debuted in 2006 with an EBS drama and then starred in the drama "Boys over Flowers" as Koo Joon-pyo. Then he built his experience with dramas "Personal Taste", "City Hunter", "The Heirs" and movie "Gangnam Blues". He is coming out with a Chinese-Korean collaborated film called "Bounty Hunters" this year but he has yet to mention a date for his National Service.

Lee Seung-gi starred in dramas "Famous Princesses", "My Girlfriend is a Gumiho", "The King 2 Hearts", "Gu Family Book" and movie "Love Forecast". He also starred in TV shows "1 Night 2 Days" and more. He is looking forward to the release of the movie "The Princess and the Matchmaker" with Shim Eun-kyung.

He mentioned NS last year and said, "I was told to wait a little longer to enlist so next year I have to enlist or go to prison".

Kim Joon-soo is the only JYJ member that hasn't enlisted yet. The other to 1986 born members joined last year.

Big Bang's Choi Seung-hyun is the oldest of the group and he will be the first to enlist in NS. He debuted in 2006 and has been a singer until he met the drama "IRIS" and movies "Into the Storm", "Commitment", "Tazza: The Hidden Card" and more.

Big Bang won the Best Singer Award at the 2015 MAMA and during their speech they said, "This might be the last time Big Bang will be on stage as a whole".

Joo Won who starred in "Bread, Love and Dreams", "Bridal Mask", "Good Doctor" and more and recently in "Yong Pal" which recorded more than 20% last year. He was awarded the Grand Prize and in an interview with several media sources, he said he was preparing to enlist at the end of this year.

Other than those mentioned, there are Jang Keun-suk, Seo In-guk, Ryeowook from Super Junior, Jung Il-woo, Ji Chang-wook and other stars born in the year 1987.

"Yoo Ah-in, Lee Min-ho and Lee Seung-gi, '86-87 year-borns enlist?"
by HanCinema is licensed under a Creative Commons Attribution-Share Alike 3.0 Unported License.
Based on a work from this source