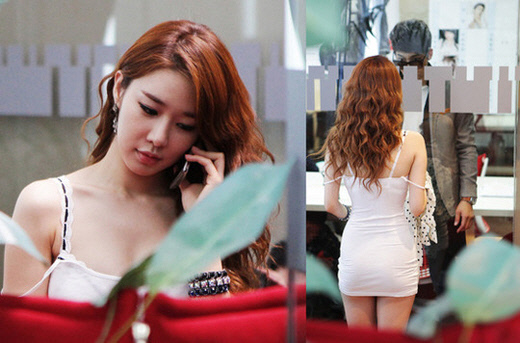 On the steal cut of the tvN program "Queen In-hyun's Man", Yoo In-na was portrayed as significantly glamorous.

Taking on the role of Choi Hee-jin in the show, Yoo In-na is discovered by her Hallyu star and ex-boyfriend Han Dong-min (Kim Jin-woo) while she is getting dressed.

In this scene, Yoo In-na's surprising body line is revealed in a tight slim-fit dress.

Meanwhile, "Queen In-hyun's Man" is a fantasy action mellow drama about a handsome scholar Kim Boong-do (Ji Hyun-woo) traveling through time to restore the reign of Queen In-hyeon. To be first aired on the 18th of April at 11PM.

"Yoo In-na shows off Coca Cola bottle body line"
by HanCinema is licensed under a Creative Commons Attribution-Share Alike 3.0 Unported License.
Based on a work from this source