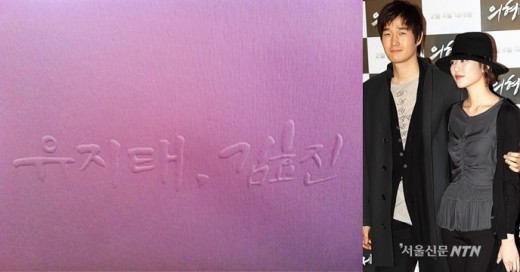 A photographer posted on her Twitter on the 28th saying, "This is the most minimal invitation I have ever received" along with a picture.

The invitation in the picture was light purple with the couple's names on it. Unlike other invitations, they don't have any fancy decorations or anything but simply just their names.

Those who have seen the picture say, "The invitations at last. So simple", "It's so them", "Yoo Ji-tae and Kim Hyo-jin I hope you guys are happy" and more.

"Yoo Ji-tae and Kim Hyo-jin's invitation only has their names"
by HanCinema is licensed under a Creative Commons Attribution-Share Alike 3.0 Unported License.
Based on a work from this source