Yoo Ji-tae experiments with the stage 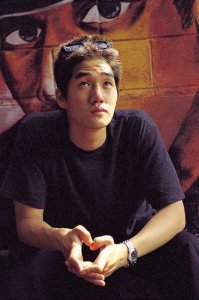 Yoo Ji-tae, a rising star in Korea's film and entertainment industry, returns to the stage with the experimental theatrical piece, "Welcome to Ghost House", next month. The drama, Yoo's second theatrical creation, is scheduled to hit the stage at Cecile Theater from April 10 to May 27.

The 31-year-old actor and film producer wannabe said that he had chosen to create another theatrical piece to remain closer to audiences.

"I can call myself a theater novice although I have already made myself known through 16 films so far. Theatrical drama, for me, is a chance to show my world and my conceptualized thoughts (directly) to audiences", said Yoo at a news conference held in Jeongdong, central Seoul, yesterday.

Yoo told reporters that the drama can be seen as an experimental piece, although he and his crew try to deliver an everlasting theme: the undetectable bond between a mother and a daughter.

"I like to take on a movie or a drama piece that has an extreme story. So we developed that sense of extremity in each scene. But it was to stress the message (love) we want to share with audiences", he said.

The drama begins with youngsters exploring a desert house to produce a TV program called 'Welcome to Ghost House'.

They meet a mysterious figure, In-woo, at the house, and through him they learn about the tragic story of a protective mother and her daughter, who sufferes from leprosy.

Yoo plays In-woo, who has a special ability to communicate with ghosts or wandering spirits.

Asked about why he produces short films or drama pieces that have nothing to do with making money, Yoo said it is because he wants to learn things through creating something on his own.

"I think it is a sort of an investment for me and for my career. I think it is a valuable attempt to make non-commercial independence film or stage drama, as a person who is involved in the commercial movie industry.

Yoo became a star actor after taking a lead role in "Old Boy" (2003), a smash-hit Korean film by the ingenious director Park Chan-wook, which received the grand prize at the Cannes Film Festival in 2004.

Yoo is scheduled to meet his fans on screen with new movie "Hwang Jin Yi" in June. The movie, co-starring Yoo and actress Song Hye-kyo is an adaptation from the famous novel "Hwang Jin-i" written by North Korean writer Hong Seok-jung.

"Yoo Ji-tae experiments with the stage"
by HanCinema is licensed under a Creative Commons Attribution-Share Alike 3.0 Unported License.
Based on a work from this source