Yoo Ji-tae, Ji Chang-wook and Do Ji-won filming in the cold for upcoming KBS drama "Healer" 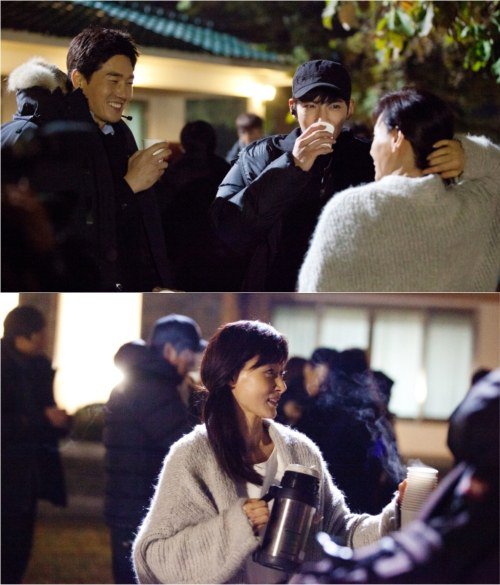 Behind-the-scene stills of the KBS 2TV drama "Healer" have appeared online. Ji Chang-wook, Yoo Ji-tae and Do Ji-won are smiling brightly while holding a cup of tea.

The pictures were taken on the 28th of October which shows Do Ji-won preparing tea for everyone who was working so hard in the cold.

One of the staff on site said, "Break time was warm and happy thanks to Do Ji-won. She prepared hot tea for everyone and showed her consideration for all those working hard".

Meanwhile, "Healer" stars Ji Chang-wook as a messenger who completes any task he is given, Yoo Ji-tae as Kim Min-ho, a star reporter and Do Ji-won is Choi Myeong-hee who is weak and bold at the same time.

"Healer" is about the children of the grown-ups from "Sandglass" in which they struggle and fight against the world their parents left behind for them. Coming soon after "Tomorrow's Cantabile" on the 8th of December.

"Yoo Ji-tae, Ji Chang-wook and Do Ji-won filming in the cold for upcoming KBS drama "Healer""
by HanCinema is licensed under a Creative Commons Attribution-Share Alike 3.0 Unported License.
Based on a work from this source