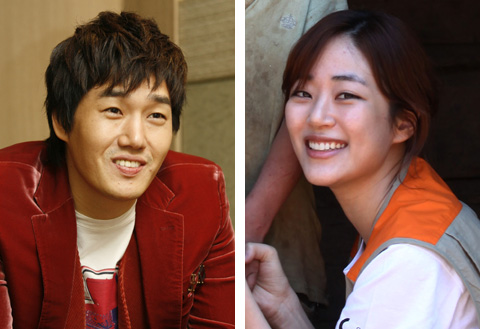 "Old Boy" actor Yoo Ji-tae (35) and actress Kim Hyo-jin (27) will wed on Dec. 2 after dating for four years, their agencies announced on Sunday.

The agencies said the couple is now seeking a suitable venue for the ceremony after they met with both sets of parents to discuss the wedding arrangements. The two first met in 2003 while modeling for an apparel company and started dating from early 2007.

Once a model, Yoo made his debut in the movie "Bye June" in 1998, and rose to stardom with the hits such as "Attack the Gas Station!" and "Old Boy", in which he played a wealthy businessman bent on revenge. He has also directed several short movies recently.

Since she made her debut as a fashion model, Kim starred in several movies and TV dramas, and is now filming the TV drama "Strangers 6", a joint production between Korea, China and Japan.

"Yoo Ji-tae, Kim Hyo-jin Decide to Finally Tie the Knot"
by HanCinema is licensed under a Creative Commons Attribution-Share Alike 3.0 Unported License.
Based on a work from this source