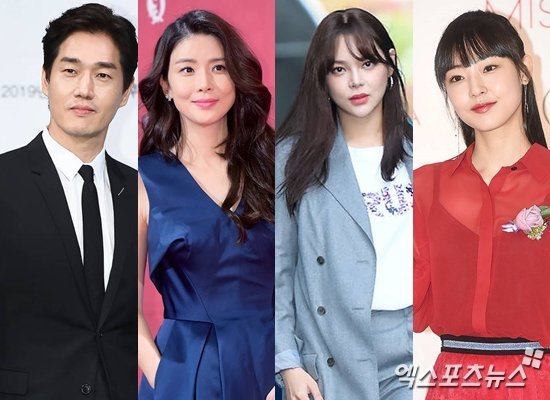 Will Yoo Ji-tae, Lee Bo-young, Park Si-yeon and Jeon So-nee get together in "When My Love Blooms"?

Their respective agencies have announced that all the actors are just considering the project as of yet.

"When My Love Blooms" is a melodramatic story about a woman in her 40s coming face to face with her first love. Lee Bo-young was offered the role of Yoon Ji-soo, a tough mother who raises a child alone. Yoo Ji-tae plays Han Jae-hyeon, a middle aged businessman. These two reunite in their 40s and sparks explode between them, allowing them to have 'the second best happiest time of their lives'.

The broadcasting organization is now an issue, as rumors say it's to be released on tvN next year. However, sources from tvN say it's not confirmed.

Attention is also being paid to the fact that "When My Love Blooms" is helmed by PD Son Jeong-hyeon who is known for other popular dramas such as "First Wives' Club", "Temptation of an Angel", "All About My Romance" and more recently "Shall We Kiss First".

"When My Love Blooms" is already receiving a lot of attention and it looks like this will continue, as the line-up alone is very convincing.

"Yoo Ji-tae, Lee Bo-young, Park Si-yeon and Jeon So-nee Considering "The Happiest Time Of Our Lives""
by HanCinema is licensed under a Creative Commons Attribution-Share Alike 3.0 Unported License.
Based on a work from this source