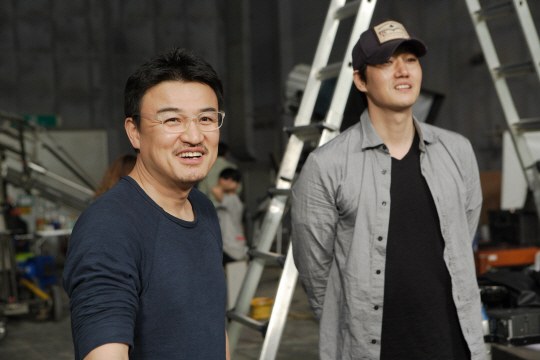 Yoo Ji-tae appeared at the filming set of "Top Star" with snacks and supported his fellow actor and the other staff. Park Joong-hoon was very happy to see him and took him around introducing him to all the standby actors and actresses.

With the common factor that they are both actors and directors, they shared a conversation about their movie aspects. Park also congratulated Yoo about the nomination of his movie "Mai Ratima" at the Doville Asian Film Festival.

Park Joong-hoon said, "I am so happy he came. His movie "Mai Ratima" will be released on the 6th of June and I hope many people will support it. It's not bright and cheerful but it is very touching".

Yoo Ji-tae's first feature film "Mai Ratima" stars Bae Soo-bin, Park Ji-soo and So Yoo-jin. This movie is a mellow human drama about the solitary love of these men and women. Park Joong-hoon's "Top Star" is about a man who started off as a manager of a star but becomes a star himself. This movie stars Uhm Tae-woong, Kim Min-joon, So Yi-hyun and more.

"Yoo Ji-tae visits Park Joong-hoon "
by HanCinema is licensed under a Creative Commons Attribution-Share Alike 3.0 Unported License.
Based on a work from this source