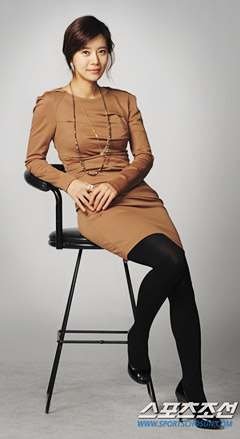 Yoo Sun's career is blossoming. She made a lasting impression in films "Black House" and "Moss", and plays the role of a warm teacher and manager of a school baseball team with a strong sense of justice in the latest film "GLove" released on Jan. 20. "GLove" topped the box office chart in its first week and is continuing to do well with over 1.5 million viewers until the Lunar New Year's holidays.

Before the filming of "GLove" began, Yoo Sun mastered sign language as her role as the manager of a baseball team composed of students with impaired hearing required. "I started learning sign language three months before shooting began. I practiced by translating song lyrics into sign language. What's so interesting is that just like the language we use, sign language has dialects and acronyms and differs from country to country. There are also slight differences among younger and older people", she says.

Because she has often played strong and solemn parts, Yoo says playing this seemingly normal character was difficult. "It was my first time playing a lively character in a film. I thought it would be a lot of fun as there should be a lot in common with my real personality, but it felt odd playing such a part because I had no experience. I realized that I had gotten so used to acting and conveying difficult life stories. Just because I have a lot in common with the character doesn't mean that it's easy".

She will have no fewer than four films released this year including "GLove". She has just finished shooting "Romantic Heaven", which is waiting for its release, and is currently filming period movie "Gabi", slated for a release in the second half of this year. Next up is "Don't Cry Mommy".