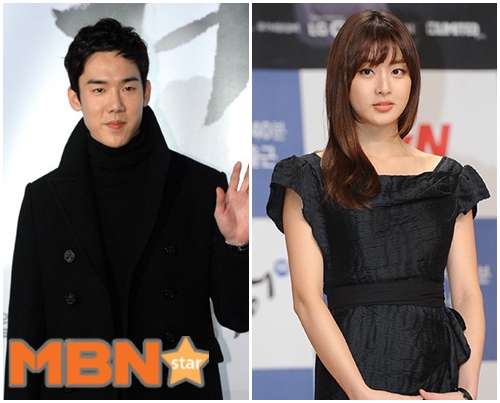 Yoo Yeon-seok will play Baek Geon-woo, an owner and chef of restaurant, "Warm and Cozy" and Kang So-ra will act as Lee Jeong-joo, an employee who has been working for the general affairs department of a clothing company for five years. The two will couple up in the drama, which is scheduled to premiere in May.

"Warm and Cozy" is a romance comedy based on the unique concept of "hard working yet depressed ant and easy-going grasshopper suffering from affection deficit" The drama will be aired after the completion of MBC's Wednesday & Thursday drama, "Angry Mom".

The drama will basically depict a romance story between a young couple who work hard managing the restaurant "Warm and Cozy" in the beautiful island, Jeju.

The word, 'maendorong' means 'Cozily warm' in Jeju island dialect. As the word implies, Hong sisters will put their distinctive touch on the stories of the young couple whose relationship grows warm and cozy gradually.

Yoo Yeon-seok took on the role as Baek Geon-woo, who is handsome, gentle and good mannered perfect guy. However, he only pursues what pleases him, a typical type of the lazy grasshopper from the well-known Aesop fables. However, his simple and honest personality defies the negative opinions about him from others. He opens a restaurant in Jeju just because of the reason there lives a girl he likes. As such, he is unexpectedly a pure hearted guy, who keeps trying to win his one-sided love's heart.

Kang So-ra will play Lee Jeong-joo who has been working harder than anyone, however keeps going through tough situations instead of enjoying the rewards. She is an ant who keeps complaining and suffering from Hwabyung, the cultural-bound syndrome. Although she acts tough, she is soft hearted and docile inside. Although she worked hard for five years in Seoul, she gets to lose her job, her lover and her house. She unwillingly begins her life in Jeju, carrying on her tattered soul.

Yoo Yeon-seok, who has been continuing his active acting career throughout movies and dramas, has showed a wide range of his acting abilities in movie 'Architecture 101' and 'A Werewolf Boy' and earned the viewers' heart on the small screens in 'Night Hospital' and 'Gu Family Book'. He became one of the sought-after actors after his appearance as a innocent-hearted baseball player in 'Answer Me 1994'.

Kang So-ra also has showed outstanding and versatile acting performances and has been loved much for her role Oh Soohyeon in 'Doctor Stranger' and Ahn Yeong-yi in "Incomplete Life". As the two young talented actor and actress have joined in a drama, the level of expectation is being raised as to how they will pull together to present their talents and unique appeals on the small screen.

"Yoo Yeon-seok and Kang So-ra land leading roles in Hong Sisters' drama, 'Warm and Cozy'"
by HanCinema is licensed under a Creative Commons Attribution-Share Alike 3.0 Unported License.
Based on a work from this source