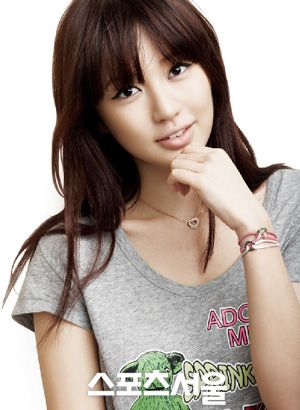 Actress Yoon Eun-hye is back on the screen; it's been five years since her last movie.

She is about to make a final decision about acting in a movie that will be released in January. Mostly, she was active in dramas, such as 'Princess Hours' and 'Coffee Prince'. Since 'The Legend of Seven Cutter', this is her second movie in her life and also her first adult–acting movie. One official from Yoon Eun-hye's company said, “We cannot expose any detailed information yet. But since this is a well matching movie with Yoon Eun-hye's character, so we decided to take this chance. We can go to shooting right away since the release date is set to January.”

While the movie schedule is set, attention is concentrated to SBS "Love Song - Drama" which casting process is already done. 'Love Song- Drama' is a remake of 'Comrades, Almost a Love Story' and was supposed to be on air at the end of 2010. But it was delayed due to Park Yong-ha's suicide. Her company is assuming that if 'Love Song- Drama' will be on air in March, she can do it between the movie shooting. If all these work out, early 2011 will be her time of the year.

"Yoon Eun-hye's interesting screen comeback; it's been five years"
by HanCinema is licensed under a Creative Commons Attribution-Share Alike 3.0 Unported License.
Based on a work from this source