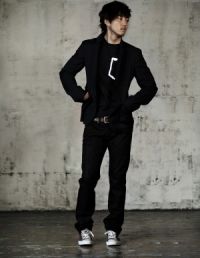 "I wanted to stay free of any thoughts when filming 'The Executioner'", said Yoon Kye-sang, who is known for his hard work in Chungmuro. Yoon admits that he is hard on himself because he wanted to receive recognition for his acting skills. He said, "I wanted people to recognize me as an actor".

To Yoon, being known only as a former member of the idol boy band G.O.D. is great pressure. That is also the reason he rarely appeared on variety shows. He wanted to be known as an actor, not as an entertainer.

Yoon debuted on the big screen in 2004 in Byeon Yeong-joo's movie "Flying Boys". It has already been six years since his debut. Yoon says he has walked a difficult road because of young passion.

In 2004, G.O.D. was embroiled in a scandal over its contract with its agency. That was also when Yoon received a movie script through his agency. It was the script for "Flying Boys". Director Byeon attached no importance whatsoever to Yoon's top celebrity status back then and gave him three days to practice his role.

Yoon says he was determined to try his best. He said, "I practiced hard during the three-day lunar New Year holiday without sleeping. Not that I wanted to be a good actor. I just wanted to defeat Mr. Byeon. But when I presented my acting to him, he okayed it at once".

Acting opened a whole new world to Yoon. He said, "I worked hard but it was fun. Everyone on the production crew was committed. I was happy on the set".

Yoon says his role in "Flying Boys" was his best by far. He said, "That's probably because I didn't care about looking cool".

While "Flying Boys" and "Lovers of 6 Years" brought Yoon a certain degree of success, the movie "The Moonlight of Seoul", where he co-stars with Ha Jung-woo, threw Yoon into despair. He said, "My part was almost entirely cut out. Jeong-woo's part was intact. About 40 minutes of my acting were gone. We worked hard together, but only my part was killed. It made me realize that putting your life at stake when acting is not good, either. I wanted to quit".

The next role Yoon received was from director Choi Jin-ho-II, who created "The Executioner". Yoon liked the script. Moreover, it was recommended by director Byeon Yeong-joo, who has been his mentor since 2004. Yoon decided to start from scratch. He said, "I tried hard to empty my head of any thoughts. I wanted to make a fresh start".

Yoon says while playing "Jae-kyung" in the movie, he became an opponent of the death penalty. He said, "I am against people judging and killing other people. But I am also against keeping criminals on death row in comfortable facilities with high-tech televisions".

Yoon says he is concerned about people who draw connections between "The Executioner" and the death penalty. He said, "It's just a story about people. I wish people viewed it more light-heartedly, as if they were touring a prison".

Because of his role in "The Executioner", Yoon has been named PR ambassador by the Ministry of Justice. "We must comply with law and order. We shouldn't make the news", said Yoon jokingly.

Yoon says he wants to appear in a movie by directors Im Sang-soo and Hong Sang-soo. He said, "If I only appear in movies about light subjects, I will deceive my own self. I want to be known as a good actor. This is just the beginning".