Yoon Si-yoon, Park Ki-woong and Lee Min-ki are coming back 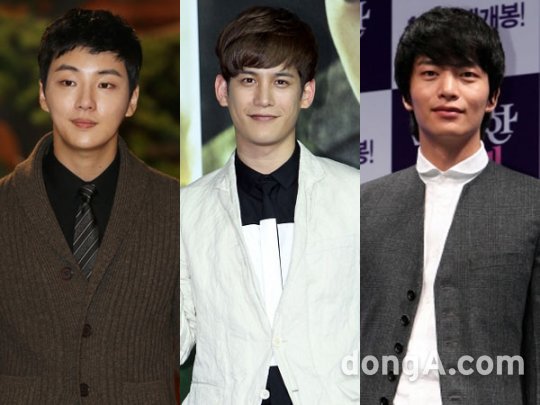 Yoon Si-yoon, Park Ki-woong and Lee Min-ki are coming back.

They are looking forward to the end of the National Duty which they have been doing for the last 21 months.

Yoon Si-yoon turned 30 this year. He was admitted to the training center in April in 2014 and he's done on the 27th. He has overcome his fear for water and is making a comeback this year.

His management claims there are still a few more days until his discharge but he's looking through choices of dramas.

Yoon Si-yoon who debuted in 2009 with the MBC sitcom "High Kick Through The Roof", became a star the next year with "Bread, Love and Dreams". He continued to star in other dramas and build on his reputation. With 100 or so more days to go, he hosted the wedding of the manager he's been with for so long.

Park Ki-woong is also coming back. Park Ki-woong signed up to be a conscripted policeman despite the fact that he made it to the Seoul District Police Agency advertisement team.

Park Ki-woong is currently serving at the 2nd task group of the Seoul District Police Agency. He is due to be discharged on the 7th of February or a little later than that according to the Lunar New Year holiday.

He seeks a new agency once he gets out. His contract with Wave On Entertainment ended in October last year. Wave On and Park Ki-woong thought it was best to move on for each others' development.

Park Ki-woong debuted in 2005 with a movie and continued to star in movies such as "Arrow, The Ultimate Weapon", "Bridal Mask" and more.

Lee Min-ki is also being discharged this year. He had 4 weeks of training at the Nonsan Training Center and is doing public service at a public administrative agency. He is returning this 3rd of August.

He will continue to act to live up to his reputation in the movie industry.

Meanwhile, actor Choi Jin-hyuk had to be pre-discharged because of a knee injury.

"Yoon Si-yoon, Park Ki-woong and Lee Min-ki are coming back"
by HanCinema is licensed under a Creative Commons Attribution-Share Alike 3.0 Unported License.
Based on a work from this source