Yoona covered up in a yellow blanket 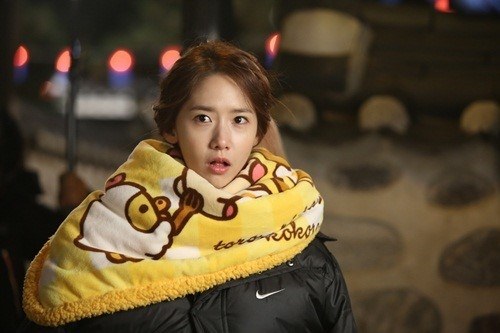 Yoona was seen wrapped in a yellow blanket.

Yoona stars in the new KBS 2TV drama "The Prime Minister and I" as Nam Da-jeong, a clumsy reporter.

Yonna is overcoming the cold of filming outside with a blanket.

She has it wrapped around her neck like a muffler and wearing a black-padded jacket. Yellow is known to be her favorite color.

She's also a fun person on site as she chit-chats with the staff and co-stars.

Although her nose is red from the cold, her smile doesn't fade as she is powered up with passion and affection for the drama.

Meanwhile, romantic comedy "The Prime Minister and I" is about a young woman who wants to get married to a stubborn prime minister. To be aired on the ninth of December.

"Yoona covered up in a yellow blanket"
by HanCinema is licensed under a Creative Commons Attribution-Share Alike 3.0 Unported License.
Based on a work from this source