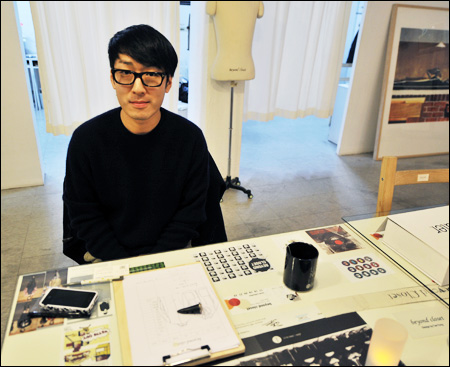 Menswear designer Ko Tae-yong, 30, is the youngest yet to have made their debut at Seoul Fashion Week. In 2008 he launched his menswear brand beyond closet and showcased his Spring/Summer 2009 Collection "Diary" at the country's most prestigious fashion event.

Ko also gained mass media exposure by designing the school uniforms and other outfits for the popular TV drama "Boys over Flowers" (2009).

But the talented designer has mainly been entertaining trend watchers with not only his stylish clothing but also with the story told through his collection.

"I actually think menswear fashion shows offer a lot more to look at", he told The Korea Times at his shop, beyond closet, in Sinsa-dong, southern Seoul, Wednesday. "I get inspiration from everyday moments and try to create shows that taps nostalgia from a masculine point of view".

His 2012 Spring/Summer collection titled "Le Jardin Botanique - bugs collection" that showcased during last year's Seoul Fashion Week in October was inspired from the childhood pastime of catching insects in the woods. The collection's jackets along with the details in the trench coats and sweaters showed intricate patterns made of leaves and insects that resemble artistic camouflage.

For his 2011 Fall/Winter collection titled "Beyond Closet Moving Company", the models carried boxes and trolleys on the runway.

Last year, he won the Grand Prize for Korea Fashion awarded by the Ministry of Knowledge Economy. Ko explained that his favorite moments as a designer is when he reinterprets ordinary moments and concepts to convey something insightful.

"When we are talking about a military look, one can easily think of a tough, masculine image. But if you think about it, most Korean guys serve in the military in their early 20s. So my collection strives to express the soft and almost scared boys who put on a brave face in an army uniform. I call it 'soft military'," he explained.

Ko sets an example for the Korean fashion industry, currently saturated with cheap and mass produced brands. He thinks designers should act smart and have a collection label as well as a separate second label - to offer a more affordable line of clothes- though some in the industry may frown at this strategy. Recently, Ko's second collection became available through TV home shopping under the label "Campaign" by beyond closet. He also sells products through American clothing outlet Urban Outfitters.

"Some designers will not approve of this approach, criticizing that it's not designer-like. I think it is unreasonable to only pursue haute fashion, or a collection label, and expect more than five people to buy jackets over 500,000 won in Korea (from a new designer)".

Many new designers are anxious as there is much uncertainty regarding the Seoul government's budget for the Seoul Fashion Center in 2012. The center oversees multiple programs such as the Seoul Fashion Creative Studio where new artists are provided with work spaces and go through vigorous critiques, much like the reality show "Project Runway". It also hosts Seoul Fashion Week.

"The Seoul government is relatively active in supporting the fashion industry. But I think it should concentrate its efforts more - right now, it is too spread out and for a designer to succeed, he or she needs long term support".