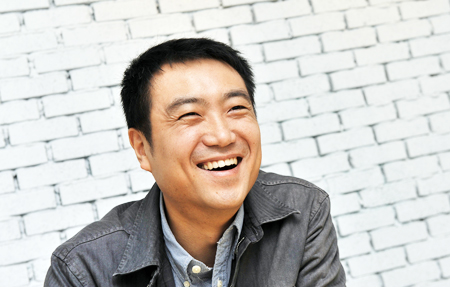 Kim Young-wook, producer and CEO of Shownote, speaks during an interview with The Korea Times at the company's office in Daehangno, Seoul, on Oct. 28. Shownote introduced "Hedwig" and "Le Passe-Muraille" to Korea and turned hit movie "200 Pounds Beauty" into a musical.

This line greets visitors to the Daehangno office of Shownote, the theatrical company that staged "Hedwig" and "Le Passe-Muraille" in Seoul.(Above photo from Korea Times by Shim Hyun-chul)

"Most art forms, including movies, books and music, have some kind of medium to 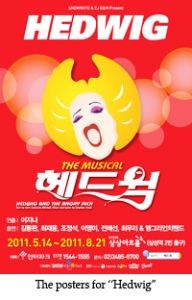 reach the audience. However,

performance art meets the audience one-to-one", Kim Young-wook, 40, producer and chief executive officer of Shownote, said in an interview with The Korea Times. "I think such an analogous encounter is the charm of theater in this digitalized era".

Kim studied physical education at Korea University and was an aspiring sports medicine intern at a medical center in Seoul. However, he could not imagine a future there and moved to a sports agency, working with players such as soccer star Ahn Jung-hwan. The company had a division dealing with concerts and performances and Kim participated in those projects too, which later led him to work on the Korean production of "Beauty and the Beast". This experience inspired him to establish Shownote in 2005.

"The name Shownote came from an in-house auction. 'Show' refers to the live entertainment we pursue, while 'note' has multiple meanings - documentation, musical notes and even bills", Kim said.

For Kim, being a producer is similar to working as a marketer. "I have to find and select a capable show, make it more interesting and earn money from it", he said.

He puts the highest priority on the audience in producing shows. "Fine or commercial art, it doesn't matter to me. In some cases, we have to emphasize pure art to sell the show, while it could be more commercial at another time. The ultimate goal is to create an art form that communicates with the audience", Kim said. 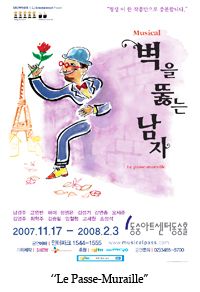 "Hedwig" and "Le Passe-Muraille" are two major works presented by Shownote. "These two demonstrate the identity of the company", Kim said.

"Hedwig", a rock musical about a transgender singer written by John Cameron Mitchell, has been a sensation in Korea since its premiere here in 2005. It has drawn more than 300,000 people and turned talents such as Cho Seung-woo, Oh Man-seok and Uhm Ki-joon into stars. The French musical "Le Passe-Muraille" revolves around a man who can walk through walls and his lover.

"I wanted to introduce something new to Korea - fresh yet interesting shows that Korean audiences haven't seen before", he said.

He said he never competed with other Korean theatrical companies to win a license.

Kim works with another Shownote producer Yim Yang-hyuk, who graduated from Seoul National University and studied music at Columbia University.

"Before we go on a business trip to a country, we read through more than 100 scripts and music of shows currently played or previously staged there. Each of us select about five of them and go see the show or at least videos if they are not being staged at the time", he said. Through such a collective process, they choose fresh and novel shows for Shownote.

"An interesting thing is that none of our choices was ever running on Broadway", he laughed. 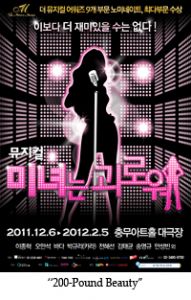 Such efforts brought "Spitfire Grill" and "Pump Boys and Dinettes" to Korea. "Those were unusual on the Korean musical scene, but I considered what Korean audiences might like", he said.

In October, Shownote staged "200 Pounds Beauty", a musical based on the 2007 hit movie of the same name, at the Shochikuza Theater in Osaka, Japan, with CJ E&M and Japan's Shochiku Company.

"We pursue different sentiment for each show and for '200 Pounds Beauty', we sought fun", the producer said.

The musical premiered in 2008, but received mixed reviews. "We improved the show by totally redesigning the set and adding new songs", he said. "The new set was inspired by a cartoon, dividing the stage in a detailed way".

The show will be performed in Korea from Dec. 6 at the Grand Theater of Chungmu Art Hall and continue to travel Asia next year.

"200 Pounds Beauty" already received offers from overseas to license the show. However, Kim is prudent in making decisions. "I think the current version is still not ready to license to other companies and that is why I am still revising the show. When it is ready, you will be able to watch licensed productions of '200 Pounds Beauty' overseas", he said.

The adventure of Shownote will continue as Kim is eager to introduce more new works to Korea next year.

"In addition to our repertoire, we will present the Korean premiere of a two-man musical 'Gutenberg!' and the musical version of 'Kiss of the Spider Woman'," he said. "We are developing our own shows, too".

Kim is not tied to the boundaries of licensed or homegrown musicals. "I don't think there is much difference in buying a license for a musical or creating a homegrown one. As long as we provide the best show for the audiences, they will come to see one. I hope Shownote makes audiences happy", he said. meeyoo@koreatimes.co.kr