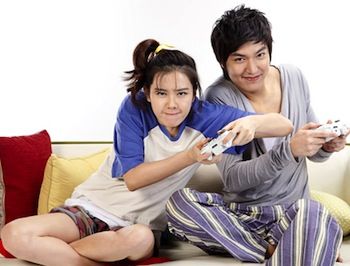 The interest in up-and-coming dramas is higher than ever in Korea as this week promises a couple of new shows aiming to catch the attention of viewers. Each boasts numerous stars and intriguing plot-lines, but also seem to fall in line with recent trends found in television and society: younger men, women in power and rags-to-riches stories.

Women dating and marrying younger men has become a social trend here, whereas in the past the opposite configuration was more common. A total of 14.3 percent of couples who tied the knot last year lived up to this trend and it is now being featured in dramas as well.

"Personal Taste" is one of the most anticipated new series, not only because of the star-studded cast, including Son Ye-jin and Lee Min-ho, but because the two actors seem to be the perfect fit to portray the trend.

"It's my first time since my debut to work opposite a guy younger than me. I was worried how I would react since I was always the youngest on previous sets, but when I met Lee, he was very mature. I think I'll begin feeling younger as I work with him throughout the drama", Son said during a press conference.

Meanwhile, actress Chae Rim is also playing an older woman in the drama "Oh! My Lady". Idol group Super Junior member Choi Si-won is the lucky man, playing a stubborn and snobbish top star, while Chae finds herself working as his agent for money.

"Younger men are like a fantasy for women in their thirties. As thirty-something female viewers rise as the main audience for dramas, series depicting such couples are increasing", said Kim Min-sik, the producer of "The Woman Who Still Wants To Marry", a drama that depicted an older woman-younger man couple early this year.

In contrast to the past, women have become viable competitors to men looking for respectable jobs. With more women jumping into the professional scene, dramas have caught onto this trend, infusing their female characters with power.

The drama "OB and GY' depicted a successful gynecologist called upon whenever emergency emerged, while the new drama "Prosecutor Princess" is set to present a Korean version of the hit American film "Legally Blonde".

Kim So-yeon from the popular drama "IRIS" plays prosecutor Ma Hae-ri, who is not only interested in her career but also in shopping and dating.

The drama focuses on the love and life of the female prosecutor, and also the efforts of numerous students dreaming of becoming successful attorneys.

"If I were to become a prosecutor in real life, I would work to change laws regarding child abuse", Kim said during a press conference early this month.

Korea's sweetheart, Moon Geun-young, is also expected to surprise fans with her transformation through the new drama "Cinderella's Sister". The 22-year-old actress has depicted sweet and innocent characters in the past, but this time she opted for a villain.
"I didn't choose the character because I wanted to change my image. I simply wanted to test how versatile I could be", Moon said during a press conference last week.

Moon will act as the lonely, dark character Eun-jo, and start a journey to find her true identity as she lives with her so-called Cinderella sister, Hyo-seon, played by actress Seo Woo.

Dramas revolving around money have also caught viewers' attention. KBS is airing a series of dramas under the theme "noblesse oblige" and the second installment of the series, "Merchant Kim Man Deok", has captivated viewers not only with its strong storyline and impeccable acting, but also the main character's wisdom and prospects for making money.

The drama deals with the life of female merchant and philanthropist Kim Man-deok and how she became one of the most successful merchants in the region despite her background as a gisaeng, or female entertainer.

Meanwhile, actor Ji Hyun-woo plays Choi Seok-bong in the drama "Birth of a Rich Man", a bellboy who believes that in order to become a millionaire, you have to act like one. Funded by a commercial bank, the series not only depicts the dramatic methods characters employ to earn money, but also offers realistic investment tips for viewers.

Actors Son Ye-jin and Lee Min-ho will star in the new soap "Personal Taste" which airs tonight at 9:55 on MBC ./Courtesy of MBC