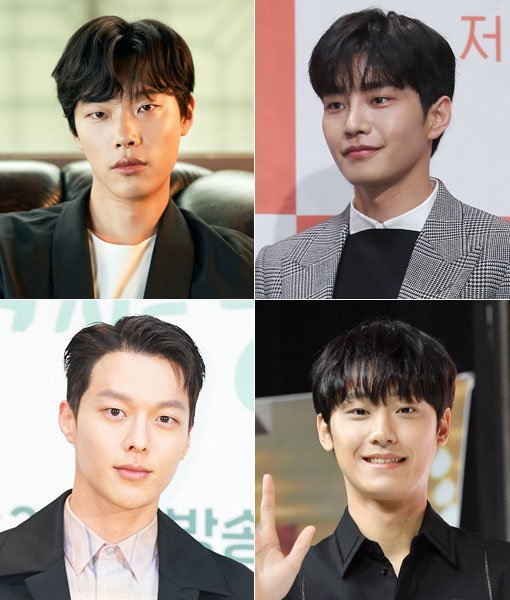 Younger guys are 'in'. This year, the romance of older couples is pouring into the small screens. Actors in their 20s and 30s, who have been selected as counterparts to top stars in their 40s, including Jeon Do-yeon, Go Hyun-jung, Lim Soo-jung and Song Hㅛe-kyo, are gathering viewers' curiosity early on. They are Lee Do-hyun and Jang Ki-yong, who are considered to be attracting attention, including Ryu Jun-yeol and Kim Jae-young, who are crossing the small screens. Through acting collaboration with veteran seniors, they are also looking to become the new youth stars.

Ryu Jun-yeol and Kim Jae-young challenge for 'extreme melo'. They will partner up with Jeon Do-yeon of JTBC's "Lost" and Go Hyun-jung of "Reflection of You" respectively. They are older couple settings with quite a gap in age differences.

Ryu Jun-yeol, who plays a wandering youth in the drama, calmly depicts the changes he experiences when he meets Jeon Do-yeon in her 40s who feels bored in life. Director Heo Jin-ho, who made the movie "Christmas in August" will stage his first drama production.

Kim Jae-young plays a young sculptor who is entangled with essayist Go Hyun-jung who is faithful to her desires. It is also expected that Shin Hyun-bin, the villain, will be at the heart of the revenge play. The drama is written by Yoo Bo-ra.

Lee Do-hyun and Jang Ki-yong will play opposite roles of Lim Soo-jung and Song Hye-kyo, who are considered 'melo masters'. Each of them is preparing to release tvN's "Melancholia" and SBS' "Now, We Are Breaking Up" in the second half of the year. In "Melancholia" Lee Do-hyun appears as a student who is embroiled in a scandal with her teacher Lim Soo-jung and has a romance as a priest. Jang Ki-yong plays a fashion photographer in "Now, We Are Breaking Up", drawing a story of love that stands out with Song Hye-kyo, the head of a fashion company's design team.

The two have recently been considered 'rookies' in the small screen, continuing their prolific career. They are drawing positive reviews as the main characters of KBS 2TV's "Youth of May" and tvN's "My Roommate Is a Gumiho", respectively.

It is noted that a series of older romance is related to the rapidly changing social atmosphere. Ha Jae-geun, a cultural critic, diagnosed on the 26th, "This is the result of the trend that women's social status increases and prejudice against older couples gradually dissipates". He added, "The 'younger man' character will continue to serve as a star gateway in that it can appeal its pure side to women who are the main viewers of the drama".