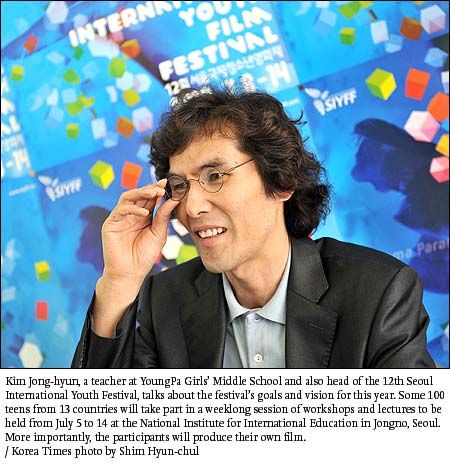 When Kim Jong-hyun, a 48-year-old teacher at YoungPa Girls' Middle School in Pungnam-dong, was a teenager, he used to sneak into R-rated films wearing his father's suit. He would also take part in poetry readings while dreaming of becoming a man of letters.

What concerns Kim is the local education system's lack of concentration on fostering children's imagination and providing an outlet through which they can channel their interests and talent creatively.

The Korean zeal for education is almost notorious - local teenagers' lives are often dictated by the singular goal of entering a brand-name university. "College entrance exams are really important but it's also important to allow children to explore their dreams and desires", Kim told The Korea Times in Seoul, Monday.

And so he launched a filmmaking camp for kids, which has grown into an international youth film festival. The Seoul International Youth Film Festival (SIYFF), one of a handful of domestic film events to be supported by the state, opens its 12th edition from July 5 to 14 in downtown Seoul. What began as a showcase of 77 films from 10 countries now has 134 works from 39 countries.

The festival may be the largest of its kind in Asia, but running it every year is tough. Kim himself has poured in much of his paycheck into it. "I was able to endure through thick and thin because I felt I was providing a platform for kids to express themselves", said Kim, who has been acting as the festival director for the last dozen events. 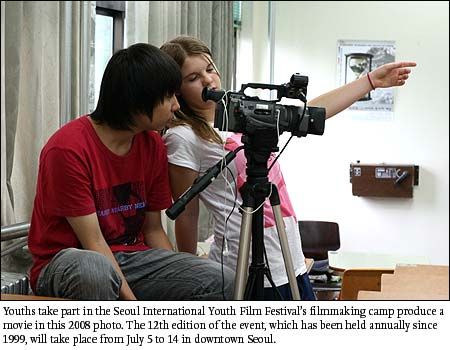 It also boasts a sizeable camp for adolescents, which renowned international film festivals such as the 40-year-old Giffoni in Italy are trying to benchmark. This year some 100 teens from 13 countries will take part in a weeklong session of workshops and lectures and moreover produce their own films.

The film festival is a playground for teenagers to indulge in cinematic fun and education - to lodge and work with kids from all over the world, show their original work and compete with their peers, and watch a diverse range of quality films.

SIYFF operates on an annual budget of about 1 billion won, which is not nearly enough to support the high demand; competition for a spot in the camp is 3:1. "We have to turn down many applicants for the camp each year because we don't have enough funding", said Kim.

"Film is a comprehensive art form and a unique type of mass media. It involves many steps, from writing the script and planning the budget to casting and scheduling in pre-production, and the actual filming and editing. Media education is crucial in this digital age, and children can learn about teamwork and responsibility and brainstorm ideas", he said.

The experience provides an invaluable experience for kids as they make friends from different cultural backgrounds. Not all students that take part in the camp are fluent in English; though translators are around many Koreans become inspired to learn and use English more comfortably. It's like one of those popular English camps for students, with other additional benefits. Even high school seniors under the pressure of college entrance exams take part to relieve the stress and leave feeling invigorated.

Renowned filmmaker Kang Woo-seok is a veteran of the festival, and Park Bo-young, the starlet of the sleeper hit "Speedy Scandal", entered the cinema scene through a short film that competed in the event.

"I believe we play some part in discovering future talent. Of course not all the kids will become filmmakers, but I think taking part in the camp will help a child develop into a healthy adult", he said.

But the film festival isn't just about media education; it's a place for dialogue and debate, and festive entertainment for the entire family. 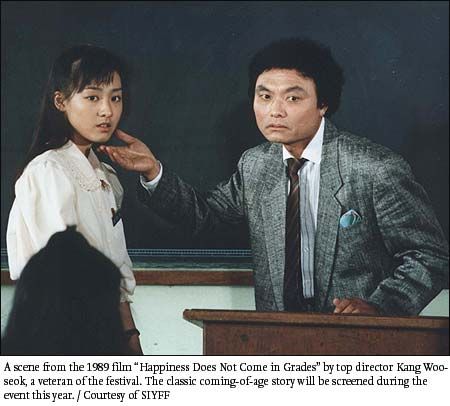 Like many film festivals it has a flexible age limit, and high school kids for example are invited to watch "mature" movies and take part in debates on controversial topics such as sex and violence. The 2009 film "Bandhobi" was rated 15 and over during the festival but was later released nationwide in theaters as an R-rated film.

"I think it's healthier to allow teens to discuss controversial topics out in the open and bring in their critical insight", he said.

The competition section, which features works by teenagers from all over the world, also provides insight into young minds and provides room for cross-generational dialogue.

"The subject matter has become a lot more diverse in recent years. The Korean kids, for example, grew up under parents who experienced the Asian financial crisis and many films depict their awareness of money matters and their conflicting feelings of hope and worry", he said.

But SIYFF is moreover a festive event for every member of the family. "We visit major international festivals to look for quality family movies and coming-of-age stories", said Kim. One of the festival's most popular sections is one for families with toddlers, who are invited to applaud loudly in the theater. For more information about the festival visit www.siyff.com.

"Youth festival urges teens to express creativity"
by HanCinema is licensed under a Creative Commons Attribution-Share Alike 3.0 Unported License.
Based on a work from this source