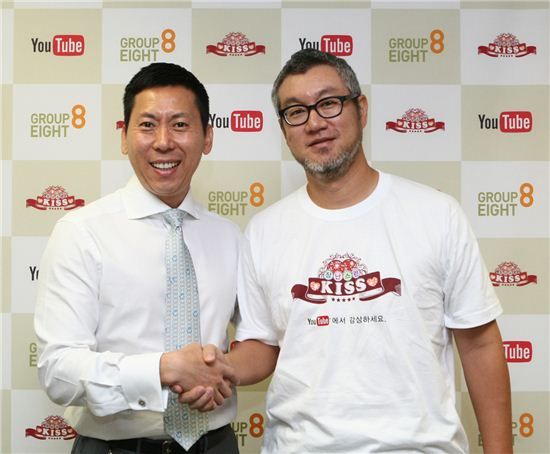 A press conference was held at Google Korea's headquarters in Seoul on Wednesday, announcing that the TV show's producer Group 8 and YouTube owner Google have agreed to create a YouTube version of the series originally based on Japanese comic "Itazura na Kiss".

The two parties explained that seven ten-minute long episodes, with the same cast and director from the TV show but with new or additional details, will be newly shot and distributed through an exclusive channel on YouTube, allowing viewers from across the world to watch the show.

"This is an innovative attempt through which a domestic drama broadcast on a public network will newly be produced into an online version, and it has significance in that it will diversify the channel through which video contents are distributed", Group 8 CEO Song Byung-joon remarked.

Starting early October, when the channel for the YouTube version of "Naughty Kiss" opens, viewers will be able to submit entries for story idea contributions as well as take part in an event recruiting subtitle creators for the show from various country.

Kim plays the role of Baek Sung-jo, the all-around Mr. Perfect-type character who ends up falling in love with a girl always getting into trouble, taken on by Jeong.

While the original Japanese comic series has sold over 27 million copies in Japan and has been made into animation in Japan and a top-rated television drama in Taiwan, "Naughty Kiss" was sold to 12 countries across the world ahead of its premiere.