Yu Jun-sang a Man of Many Talents 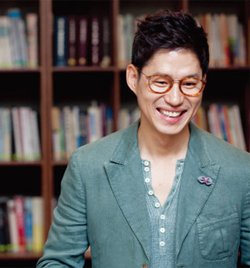 As well as appearing in KBS' popular weekend drama "My Husband Got a Family", actor Yu Jun-sang is busy promoting his new movie, performing in a musical and publishing a book. The 40-year-old is creating a buzz these days as his fan base explodes and many female admirers dub him "Mr. Perfect".

Something of a multi-talented over-achiever, Yoo has also shown his musical and dancing skills through a number of musicals and plays. In addition, he is good at painting and plays several musical instruments. According to his wife, actress Hong Eun-hee, he is also a great husband and not so different off-screen from the persona he projects on TV.

Yoo has also compiled his writings and drawings and published them as a book.

"When I was majoring in theatre at university, one of my professors told me that keeping a journal is very helpful to be a good actor, so write about a day, and also try to write poems and draw pictures", he recalls. Since then, he has faithfully recorded his thoughts and feelings in a diary every day, and excerpts from these to make up much of his book.

"I've filled up more than 20 diaries. I wrote about how I felt while learning more about acting, among other things, every day for 20 years, and also drew a lot of pictures. After publishing the book, I was overwhelmed with joy because it's just basically my life story", he said. He plans to donate all of the proceeds from the book to charity, especially for children in need.

"There were a lot of things I wanted to do besides acting, and I didn't want to miss out on any of them, from singing to dancing, writing, drawing and playing instruments. People say it's better to focus on one thing in order to be successful, but I never really had to make any sacrifices like that", he said.

Yoo said that after spending 20 years figuring out what he likes and where his true talents lie, he is able to put all that experience to good use as an actor. Asked about his future plans, he said, "I want to write a fairy tale for adults. If I get the chance to publish another book, it will definitely be something like that".

"Yu Jun-sang a Man of Many Talents"
by HanCinema is licensed under a Creative Commons Attribution-Share Alike 3.0 Unported License.
Based on a work from this source