Yun-ha's Japanese Film to Be Released 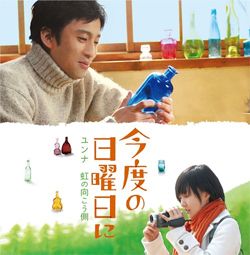 A Japanese film titled "On This Sunday" starring Korean singer Yun-ha will open in Japan in mid-April. Yun-ha will make personal appearances in Tokyo and Osaka on April 11 and 12th to promote the film. She has already attended the premier at the FM Hall in Tokyo last Thursday. Director Satoki Kenmochi said that when he saw Yun-ha on TV singing, he felt that she was the female lead he was looking for.

At the premier Yun-ha said that the hardest part was pretending to speak poor Japanese. In the film her character is a Korean student, who struggles to adapt to life in Japan. Yun-ha is actually very fluent in Japanese. She also sings the film's title song "Over the Rainbow".

The male lead of the film is played by Japan's renowned kabuki actor Somegoro Ichikawa. It's still unknown whether the film will be shown in Korea.