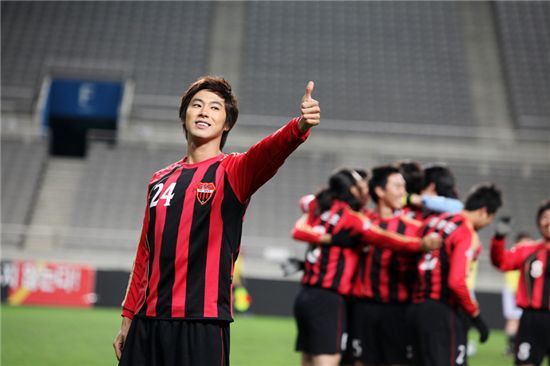 Yunho Yunho in a scene from TV series "No Limit" [MBC]

The newly-released DVDs for MBC TV series "No Limit", starring TVXQ leader Yunho Yunho, is selling off the shelves in Japan, according to the country's Oricon charts.

According to Oricon's weekly DVD charts for television drama category, the two DVD box sets for "Limit" were the two best-selling DVDs in the country, ranking at No.1 and No.2 for the week of June 21.

It is the first time in over three years that a Korean television drama has topped Oricon's DVD chart -- Hallyu star Bae Yong-joon last conquered the charts in 2007 with TV series "The Legend".

The two lead actors, Yunho Yunho and Go Ara, attended a fan event in Japan to celebrate the DVD launch of "No Limit" over the weekend.

"Yunho Yunho's "No Limit" DVD tops Oricon charts in Japan"
by HanCinema is licensed under a Creative Commons Attribution-Share Alike 3.0 Unported License.
Based on a work from this source