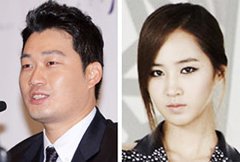 The agency confirmed their relationship after magazine reports that many people spotted the two on dates in Seoul and Incheon since November.

Oh is one of the nation's best pitchers and twice set the record for most saves in a season. He played with the Samsung Lions since 2005 until he moved to Japan last year.

Now most of the members of the Girls' Generation except Sunny and Seohyun are in a relationship -- Yoona with singer Lee Seung-gi, Choi Soo-young with actor Jung Kyung-ho, Tiffany with Nichkhun of K-pop boy band 2PM, and Taeyeon with EXO's Baekhyun.

On a less happy note, Hyo-yeon was belatedly reported to have been in a relationship after an incident where she was questioned by police on charges of assaulting her ex-boyfriend. Ex-member Jessica is also reportedly dating an investment banker in Hong Kong.